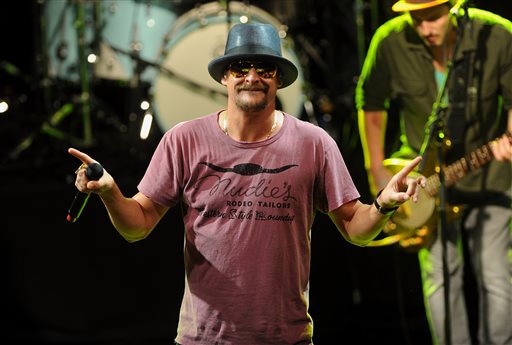 This May 5, 2015 file photo shows musician Kid Rock performing during National Concert Day in New York. Activists in Detroit trying to persuade Kid Rock to stop displaying the Confederate flag at concerts plan to meet this week with General Motors over the Chevrolet brand’s sponsorship of the musician’s summer tour. (Photo by Brad Barket/Invision/AP, File)

DETROIT (AP) — General Motors officials have met with the leader of a Detroit activist group that wants the automaker to cut financial ties with Kid Rock over the musician’s use of the Confederate flag.

GM spokesman Patrick Morrissey tells The Associated Press in an email that “a very constructive conversation” was held Thursday with the Rev. Charles Williams II. Williams called it “encouraging.”

Williams and the National Action Network have protested the flag display during performances.

Williams is concerned that Rock still appears with the flag on social media.

Obama: No Mechanism to Revoke Cosby’s Medal of Freedom