Obama: No Mechanism to Revoke Cosby's Medal of Freedom
Advertisement 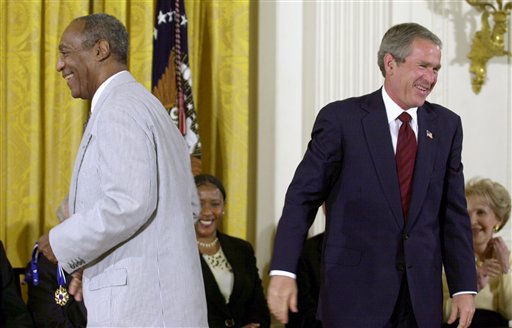 In this July 9, 2002 file photo, President George W. Bush lets out a laugh after failing to get the clasp together on Bill Cosby’s Presidential Medal of Freedom, which he holds, after Bush tried to put on the entertainer, in the East Room of the White House in Washington. (AP Photo/Kenneth Lambert, File)

“There’s no precedent for revoking a medal,” Obama said. “We don’t have that mechanism.”

The president, who was asked about Cosby’s medal at a news conference, declined to address specific allegations against the entertainer because there are pending legal matters. But Obama left no question about his thinking on the larger issue of drugs, consent and rape.

“If you give a woman, or a man, for that matter, without his or her knowledge a drug, and then have sex with that person without consent, that’s rape,” he said. “And I think this country, any civilized country, should have no tolerance for rape.”

Court documents obtained by The Associated Press have revealed that Cosby acknowledged under oath in 2005 that he obtained Quaaludes to give to women with whom he wanted to have sex. The documents weren’t clear on whether the women consented to being drugged.

The leader of a sexual assault awareness group that has urged the White House to revoke Cosby’s medal expressed disappointment in the president’s statement.

Angela Rose, executive director of Promoting Awareness Victim Empowerment, said there are plenty of ways for the president to take a more emphatic stand.

“Allowing Cosby to maintain this coveted symbol suggests that we as a society condone coercive sexual behavior,” Rose said. “This is an unprecedented moment, and we need to show zero tolerance for sexual assault.”

The organization has suggested three ways Obama could deal with Cosby’s medal: issue an executive order rescinding it, issue a personal statement that it should be rescinded or ask Cosby to return it. More than 10,000 people have signed the group’s petition calling for the medal to be rescinded.

“Revoking the medal would send a powerful message to America’s youth on the critical importance of consent,” Rose said, adding that her group has requested a meeting with the president and first lady Michelle Obama.

More than two dozen women have accused Cosby of sexual misconduct in the past four decades, and many of them alleged that he drugged them before sex.

The 78-year-old comedian, who has never been charged with a crime, has denied some accusations while declining to comment or respond to others.

President George W. Bush awarded him the Medal of Freedom in 2002.