Former US No. 1 James Blake 'Slammed to Ground' by Police in Mistaken Detention
Advertisement 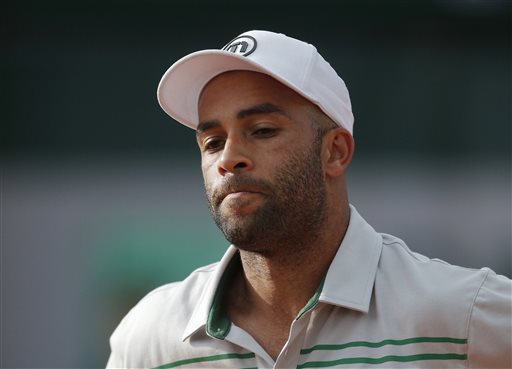 In this May 26, 2013, file photo, James Blake grimaces after missing a return against Serbia’s Viktor Troicki at the French Open tennis tournament in Paris. (AP Photo/Michel Spingler, File)

(The Guardian) – The former US No 1 tennis player James Blake was wrestled to the ground and handcuffed in New York as he was preparing to attend the US Open on Wednesday.

Blake, who is African-American, was detained by five white plainclothes police officers as he stood outside a Manhattan hotel. They had mistaken him for a suspect in an identity theft case.

The 35-year-old said he had been talking to a tennis writer when he noticed someone moving towards him. “Maybe I’m naïve, but I just assumed it was someone I went to high school with or something who was running at me to give me a big hug, so I smiled at the guy,” Blake told the New York Daily News.

Blake was instead thrown to the ground by the plainclothes officer, who told him to roll on to his front. The former world No4 suffered a cut and bruising in the incident. After Blake had been handcuffed for 15 minutes, one of the officer’s four colleagues realized they had got the wrong person and he was released. The officer who had thrown Blake to the ground did not apologize.

Giants Say Jason Pierre-Paul Not Ready to Play, Back Home