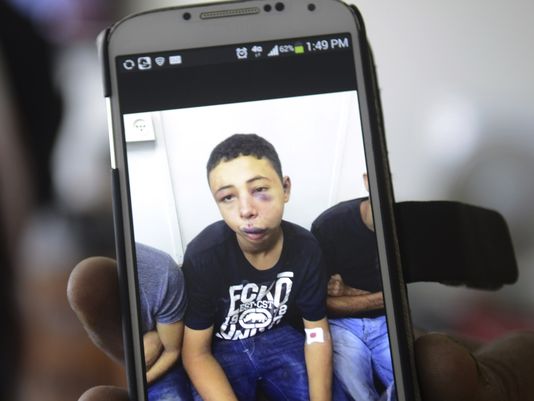 Suha Abu Khdeir, mother of Tariq Abu Khdeir, a U.S. citizen who goes to school in Tampa, shows a mobile phone photo of Tariq taken in a hospital after he was beaten and arrested by the Israeli police. (Mahmoud Illean, AP)

(USA Today) TAMPA, Fla. — The teenager who was beaten by Israeli police earlier this month is expected to return to his family Wednesday.

“I can’t wait to see him and see the rest of the family,” said Hamdi Swalem, Tariq Abu Khdeir’s uncle. “The friends, the family — we’re going to be there just to welcome him.”

The 15-year-old Palestinian-American student who attends the Universal Academy of Florida High School was in Jerusalem and attended a demonstration for his Arab cousin, Mohammed Abu Khdeir, who was murdered in retaliation for the deaths of three Israeli teens.