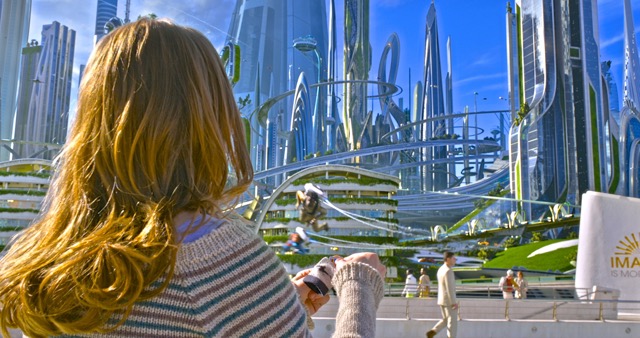 If you took the world of The Jetsons, and made it a live-action film location, that would describe the visuals for the mysterious, glorious and fantastical place Tomorrowland. Seeing it is easy. Getting there is difficult. All the work it takes to travel to this paradise may not be worth the effort for this film’s target audience, young girls. Blame the meandering script, the lax pacing and some cheesy sets for making a trip to Shangri-La an iffy adventure.

Director Bard Bird (The Iron Giant and Mission: Impossible — Ghost Protocol) co-wrote the script with Damon Lindelof (World War Z) and Jeff Jensen. Can’t knock Bird and Lindelof’s writing pedigree, on the one hand. On the other hand, with that much firepower, they should be able to write a script that is worth following, one that unfolds mysteriously but engagingly and is easy enough to comprehend. A film that panders to young female audiences shouldn’t have a complicated screenplay. If adults lose interest discerning what’s going on, kids will be scratching their heads, text messaging or falling asleep.

It’s 1964, the height of the New York World’s Fair. A precocious kid named Frank Walker (Thomas Robinson, who looks like a young Jay Leno) has come all the way to the Big Apple to show off his invention, a jet pack that can make him fly—theoretically. He presents it to a huffy judge named Nix (Hugh Laurie), who scoffs at the machine made with two vacuum cleaner tanks. Nix’s young assistant Athena (Raffey Cassidy, Snow White and the Huntsman) takes a liking to Frank, gives him a lapel pin with a “T,” and suggests he follow her, Nix and his crew. Frank does, and winds up in a futuristic citadel.

Fast forward to present day. Casey Newton (Britt Robertson, The Longest Ride), a feisty adolescent, her dad (Tim McGraw) and younger brother live in Cape Canaveral, Fla., so close to NASA she can smell the jet fuel. She gets arrested, and when she is released, she is given back her personal belongings. In her stuff is a mysterious lapel pin with a “T.” Whenever she touches the trinket, inexplicably, she is taken away to fields of wheat, with a mystical city floating in the distance. “I think I’ve seen the future,” says Casey. As she tries to unravel the mystery of the pin she meets Athena. The two, and a much older Frank (George Clooney) who is now an eccentric, reclusive inventor, are on a mission to get back to Tomorrowland.

The inspiration for the film comes from Disneyland’s Tomorrowland and Epcot Center. That very inorganic premise is possibly why the script feels so contrived. The Casey character is decently drawn, should intrigue girls and Newton makes her very appealing. The older Frank character, as played by Clooney, is so crabby you want to force-feed him Prozac. Ditto Laurie as the bitter Nix. As the story goes on, and on, and on, it becomes apparent that Wonderland needs to be saved for a bunch of reasons. None are that clear, nor will they be of great concern to many.

Scott Chambliss’ (Star Trek Into Darkness) production designs for the magical city are ingeniously beautiful. At other times his sets look obviously fake (interior of the inter-dimensional space ship) to the point of distraction. Cinematographer Claudio Miranda’s (Life of Pi) visions of the city will stay in your psyche. His shots of regular scenes are dated and reminiscent of Back to the Future. Jeff Kurland’s costumes on the normal people blend in well, but his space age fashions for Nix look like rejects from an Earth Wind & Fire tour. There are periods when Casey, Frank and Athena are on the run and the pace kicks in. But over the course of 130 minutes, editors Walter Murch and Craig Wood have not done their due diligence. There are times when you will tap your foot and wonder if there is any popcorn left at the concession stand.

The point of Tomorrowland is to encourage youngsters to think out of the box, stay positive and never give up. It’s a sweet and inspirational message buried in a mire of cryptic plotting. Still, young girls may get a kick watching Casey solve problems adults can’t.