Ferguson Protest Organizers: ‘I Sleep, Eat and Breathe This’
Advertisement 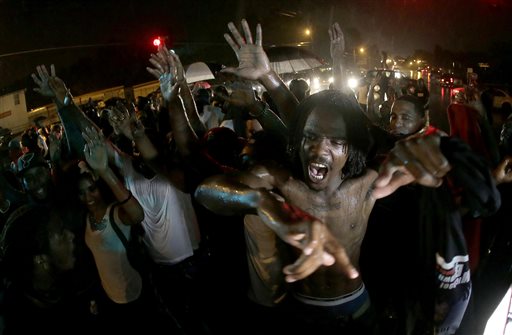 In this Aug. 17, 2104 file photo people defy a curfew before smoke and tear gas was fired to disperse a crowd protesting the shooting of teenager Michael Brown in Ferguson, Mo. (AP Photo/Charlie Riedel, File)

(The Washington Post) – It was 8:30 a.m., and DeRay Mckesson was at a McDonald’s here, the place humming with customers despite riots that left the businesses on both sides boarded up.

With two iPhones and a laptop glowing on the table before him, Mckesson began editing the slickly curated newsletter of articles, tweets and photographs that he and a friend have published almost every day since an unarmed 18-year-old, Michael Brown, was shot by a police officer just around the corner.

Mckesson’s readership has been mounting as tensions in Ferguson are again on the rise ahead of a grand jury’s decision, expected in the coming days, of whether to indict the officer, Darren Wilson.

The protest campaign, which emerged out of the riots that followed Brown’s killing, lacks a single charismatic leader or direction from a national organization. But at the front lines, an influential contingent of organizers including Mckesson is giving the movement a sense of identity and shaping how the American public sees it.

Detroit Starts Down the Road to Recovery, Respect