Detroit Starts Down the Road to Recovery, Respect
Advertisement 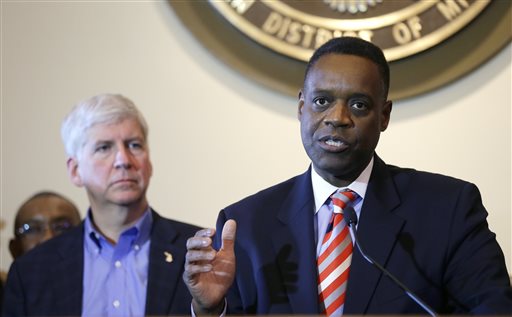 DETROIT (AP) — The largest U.S. city to endure bankruptcy has exited insolvency $7 billion lighter in debt, but the effects of civic neglect linger for many in Detroit who still fall asleep to echoes of gunfire and awake surrounded by blocks and blocks of abandoned houses.

A federal judge on Friday approved outgoing emergency manager Kevyn Orr’s long-term fiscal recovery plan, which calls for $1.7 billion to remove blight, train city workers, hire more first responders and shore up services to improve the lives of Detroit residents. The city will spend $420 million to raze vacant houses and clear lots; $167 million for new police, fire and EMS vehicles; and $715 million to hire and train workers and for other general upgrades.

Some people, like Eugene Weller and Bishop White, wonder how long it will be before they see and feel a full recovery in the city that once was home to nearly 2 million residents and pulsed to the around-the-clock rhythm of auto assembly lines that kept people working and off the streets.

“If it’s going to better everything, I’m for it,” said White, a 67-year-old retired auto worker. “If they are going to (just) fix up downtown neighborhoods, no. I ain’t for it. People still live out here. They’re like — forgotten.”

White’s home is one of only four occupied houses on his west-side block and is sandwiched between two empty lots. He wants to buy a lot from the city; crews razed the house that had been there, but the former basement sags and needs more backfill. It’s another example of something the city failed to do right the first time, White said.

“I’m not going to put no money in the lot and then have to live next door to this,” he said, pointing in frustration at the hard, pock-marked dirt.

Restructuring won’t be easy. There will be lean years as elected city leaders search for ways to increase revenue.

Mayor Mike Duggan has said making Detroit more functional could persuade residents to stay and attract new ones. The city’s population is about 688,000, down nearly 30 percent from 2000 and a far cry from the 1.2 million in 1980.

Detroit’s Land Bank has been awarded $52 million in federal money to demolish at least 3,300 of more than 40,000 vacant structures; about 2,300 are already gone. A public lighting authority also is installing thousands of street lights in once-dark neighborhoods. And Duggan has solicited plenty of community, private foundation and corporate support on a blight eradication plan.

Other improvements include a high-speed rail being built through Detroit’s downtown and improving Midtown neighborhoods, and a new professional hockey arena and entertainment district is being built just north of downtown.

The $1.7 billion called for in the plan is “seed capital … really developing the city’s property tax base so those changes can be sustained at a higher level,” according to Pat O’Keefe, a municipal turnaround specialist and chief executive of O’Keefe and Associates. “The ability to attract industry, commerce and residents is ultimately what’s going to drive the feasibility of the bankruptcy reorganization plan.”

Adding jobs will also help spur any renewal. In his 2013 proposal to creditors, Orr wrote that Detroit’s unemployment rate was more than 18 percent.

“Job creation is a crime preventer,” said Andra Rush, founder of a Michigan-based trucking company, among other things. Detroit Manufacturing Systems — a joint venture with Rush’s company that began in 2012, that makes car and truck interiors and has 800 workers — is growing and trying to fill about 200 jobs.

And just being able to take home a paycheck also means a lot to people who have struggled for years to find jobs, said Rush.

“It can change the lives of families forever,” Rush said.

Change can’t come quick enough for Weller, who lives in the neglected Brightmoor neighborhood in northwest Detroit. There is gunfire many nights of the week and none of the 10 vacant houses on his block has yet to be torn down.

“If you’re out at night and you’re walking through the street you don’t know who is going to come out of these houses,” said Weller, 62, who moved from Texas three years ago to be closer to his children.

Still, the city has fixed a few street lights and installed a new one.

“The neighborhood looks a whole lot better now. You can more or less see what’s going on,” Weller said.

Ferguson Protest Organizers: ‘I Sleep, Eat and Breathe This’