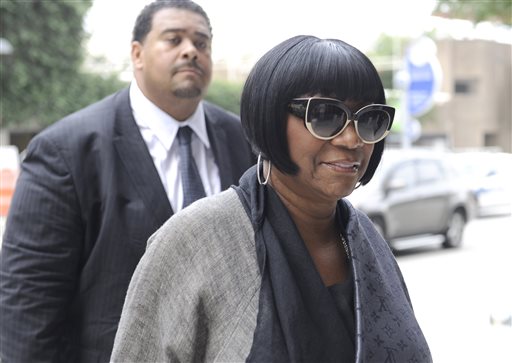 Soul singer Patti LaBelle arrives at the federal courthouse for jury selection Tuesday, Sept. 16, 2014, in Houston. A former West Point cadet is suing LaBelle saying she ordered her bodyguards to beat him up as he waited for a ride home outside a Houston airport terminal in 2011. (AP Photo/Pat Sullivan)

HOUSTON (AP) — A former West Point cadet has lost a multimillion-dollar lawsuit against members of R&B singer Patti LaBelle’s entourage whom he accused of beating him as he waited for a ride outside a Houston airport terminal.

In his lawsuit, Richard King alleged he was attacked without provocation by LaBelle’s bodyguard and two others while waiting outside Bush Intercontinental Airport in 2011. King had just arrived in Houston, his hometown, while on spring break from West Point.

After five days of testimony and 10 hours of deliberation, a federal jury in Houston on Tuesday night absolved Zuri Edwards, LaBelle’s manager and son; Efrem Holmes, her bodyguard; and Norma Harris, her hairdresser.

LaBelle had been dropped from the suit early in the trial.

John Raley, one of King’s lawyers, told jurors that King was minding his own business outside the airport terminal when he was attacked without provocation by the 400-pound Holmes, as well as by Edwards and Harris. Raley said King had to drop out of West Point because of a traumatic brain injury he suffered when he hit his head on a concrete pillar during the attack.

Bracken blamed King’s drinking for the incident and suggested that King’s career at West Point was ended not by his injuries but by a previous history of poor academic performance. Raley said King had a blood alcohol level of 0.28 — more than three times the legal limit for driving — but that King was not driving and was no danger to anyone.