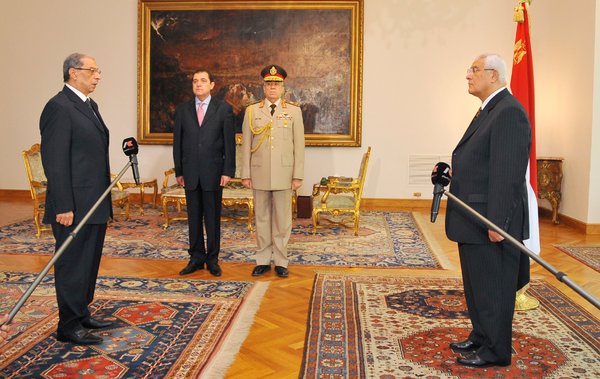 Newly-appointed prosecutor general Hisham Barakat, left, is sworn in in front of interim president, Adli Mansour, right, at the presidential palace in Cairo on Wednesday.

CAIRO — The new military-led government accused Mohamed Morsi and his allies in the Muslim Brotherhood on Wednesday of a campaign to incite violence against their foes before and after his ouster as president, offering a new explanation for the week-old takeover and hinting that the group might be banned once again.

As protesters rallied against Mr. Morsi in the weeks leading up to his forced removal on July 3, “the other side held conferences to call them ‘infidels’ ” and his supporters “incited to call for the killing of opponents of the president,” Ahmed Ali, a military spokesman, said in a briefing for the international news media. “Such calls were approved and advocated by the presidency,” he added, suggesting that such threats — and not just large public demonstrations or political deadlock — forced the military to intervene.

Leaders of the Brotherhood, Egypt’s mainstream Islamist group, denied those charges. They noted that the main slogan of their rallies before the takeover had been “No to violence,” and that the group had not condoned violence in Egypt since the British occupation.

The new explanation appeared aimed at adding to the justification for a broadening crackdown, including new arrest warrants issued Wednesday for the Brotherhood’s spiritual leader, Mohamed Badie, and eight other well-known allies.