Ebola Crisis in Guinea 'Has Set Back Malaria Fight'
Advertisement 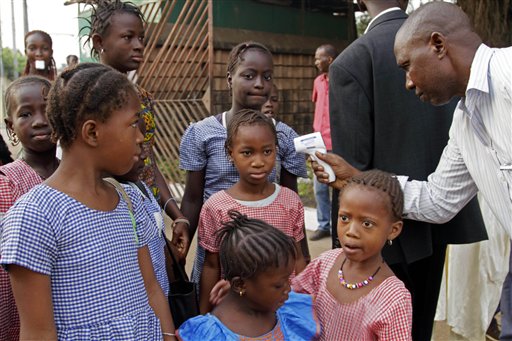 In this Monday, Jan. 19, 2015 file photo, a health care worker, right, takes the temperatures of school children for signs of the Ebola virus before they enter their school in the city of Conakry, Guinea. (AP Photo/Youssouf Bah, File)

(BBC) – The continuing Ebola epidemic in Guinea has set back the country’s fight against malaria, say experts.

They estimate 74,000 cases of malaria went untreated in 2014 because clinics were either closed or patients were too scared to seek help.

They warn that malaria deaths since the Ebola outbreak began will far exceed the number of Ebola deaths in the country – which now stand at 2,444.

Their report is in the Lancet Infectious Diseases journal.

Both Ebola and malaria cause fever. The authors of the Lancet report say fear surrounding the Ebola virus may have stopped patients in Guinea going to see a doctor to get this symptom checked.