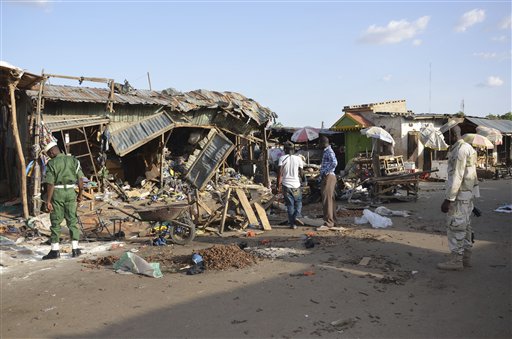 People gather at the site of a suicide bomb attack at a market in Maiduguri, Nigeria, Monday June 22, 2015. Two girls blew themselves up on Monday near a crowded mosque in northeast Nigeria’s biggest city, killing about 30 people, witnesses said. It is the fourth suicide bombing this month in Maiduguri, which is the birthplace of the Boko Haram Islamic extremist group. (AP Photo/Jossy Ola)

(BBC) – Boko Haram militants have killed at least 40 people in north-eastern Nigeria, according to witnesses.

The attacks on Monday and Tuesday took place in the villages of Debiro Hawul and Debiro Bi in Borno state.

Residents say the militants drove into the towns and began shooting, looting and burning houses.

In a separate attack, a young female suicide bomber reportedly killed at least 10 people in the neighbouring state of Yobe.

A witness said the girl, who detonated explosives in the town of Gujba on Tuesday, was about 12 years old.

Dylann Roof is The New Face of Globalized Hate: Why White Nationalism is a Distinctly Modern Threat

Ebola Crisis in Guinea ‘Has Set Back Malaria Fight’