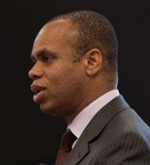 Democratic National Committee executive director Patrick Gaspard, formerly the Obama White House political director, appears to be the administration’s pick to be the next ambassador to South Africa.

Gaspard, a major player in New York City  politics — he worked on former Mayor David Dinkins’ campaign, for example, — was  a top operative of the Service Employees International Union and a political organizer.

He also was actively involved in organizing efforts in the 1980s and ’90s  to topple South Africa’s apartheid regime. While in the White House, Gaspard, a Haitian American, was also a key player in U.S. relief efforts in Haiti after a powerful earthquake devastated the country three years ago.

Although he grew up in New York City, Gaspard was born in Zaire, now known as the Democratic Republic of Congo, after  his Haitian-born parents moved there for his father’s teaching job. The family moved to New York when he was 3.