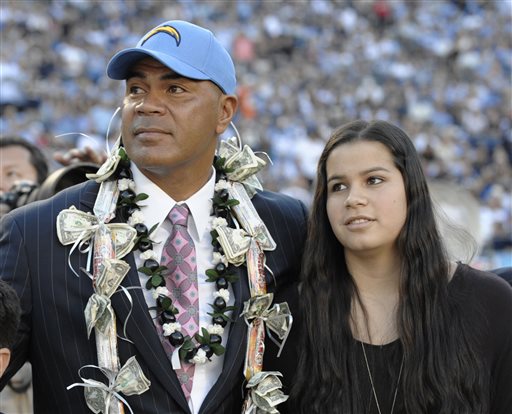 In this Nov. 27, 2011, file photo, former San Diego Charger Junior Seau stands with his daughter, Sydney, at his induction into the San Diego Chargers Hall of Fame, during halftime of an NFL football game in San Diego. (AP Photo/Denis Poroy, File)

(ESPN) — A Pro Football Hall of Fame policy will prevent members of Junior Seau’s family from speaking at the deceased linebacker’s induction ceremony in August.

Seau’s daughter, Sydney, was listed as a presenter on her father’s behalf in a Hall of Fame news release sent July 15. However, she will be commenting only on a video when her late father enters the Hall of Fame on Aug. 8.

The Hall of Fame said in a statement that is consistent with its policy concerning the induction of deceased players.

“The policy of the Pro Football Hall of Fame since 2010 regarding individuals enshrined posthumously provides for an expanded presenting video (longer than the videos of living inductees) followed by the traditional unveiling of the bronzed bust and no additional comments made from the podium,” the statement said.

“This policy is not precedent setting and was implemented for the first time in 2011 when former Los Angeles Rams great Les Richter was inducted posthumously.”

In the case of the Seaus, the policy fosters heightened sensitivity because of Seau’s suicide in 2012 at age 43. After his death, he was diagnosed with chronic traumatic encephalopathy, or CTE, a neurodegenerative disease that has been found in the brains of dozens of deceased NFL players due to repeated head trauma.

Bolt ‘Will Show Up’ at World Championships in Beijing