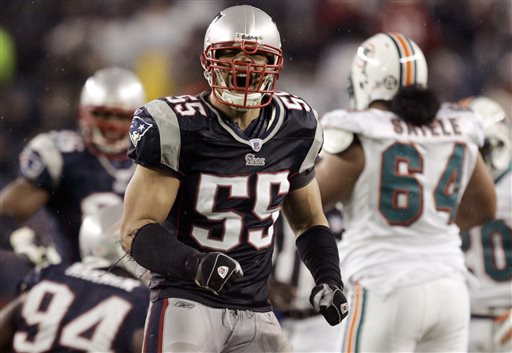 In this Dec. 23, 2007, file photo, New England Patriots linebacker Junior Seau (55) reacts after a defensive play during an NFL football game against the Miami Dolphins in Foxborough, Mass. A federal judge has approved Wednesday, April 22, 2015, a plan to resolve thousands of NFL concussion lawsuits that could cost the league $1 billion over 65 years. (AP Photo/Elise Amendola, File)

(Reuters) – Former National Football League players who oppose the league’s potential $1 billion settlement of lawsuits claiming it hid the risk of concussions asked a federal appeals court on Monday to throw out the accord.

In a filing with the 3rd U.S. Circuit Court of Appeals in Philadelphia, 10 former players said the settlement with more than 5,000 retirees was unfair because it did not properly treat players yet to be diagnosed with chronic traumatic encephalopathy (CTE), a degenerative condition linked to repeated blows to the head.

These players, including five-time Pro Bowl defensive lineman Fred Smerlas, said the settlement unfairly favored currently injured retirees over those merely exposed to head trauma, and left a potential 19,000 players who have yet to be diagnosed with neurological diseases without a remedy.

“It is the height of hypocrisy for the parties to defend a settlement that offers nothing for CTE to the vast majority of class members by arguing that those claims could not prevail at trial because the science is too new,” lawyer John Pentz wrote for the objecting players.