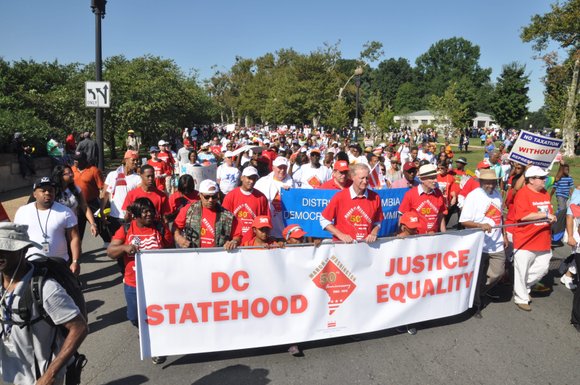 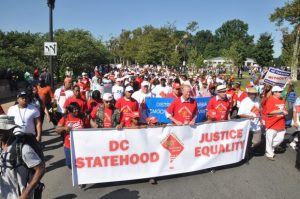 Hundreds turned out for the D.C. Statehood Rally and March on Saturday, Aug. 24 at the District of Columbia War Memorial. (Photo courtesy Roy Lewis/Washington Informer)

Hundreds of District residents attended an early morning rally leading up to the commemorative March on Washington to voice their outrage over their political rights being trampled upon and pledged to become far more proactive in their efforts to get a vote in the U.S. Congress and, ultimately, statehood.

District elected officials and residents participated in the rally which took place at the District of Columbia War Memorial in Southwest on Saturday, Aug. 24. D.C. Mayor Vincent Gray (D) shared his memories of the original March on Washington on Aug. 28, 1963 with the crowd.

“I was a young college student at George Washington University and I participated in the March on Washington,” said Gray, 70. “It was an absolutely spine-tingling experience. How well I remember Dr. [Martin Luther] King, and his ‘I Have a Dream’ speech, appealing to Americans of all backgrounds to live up to their promises on which our country was founded – that all human beings are created equal, and that we deserve equal rights to life, liberty and the pursuit of happiness.”