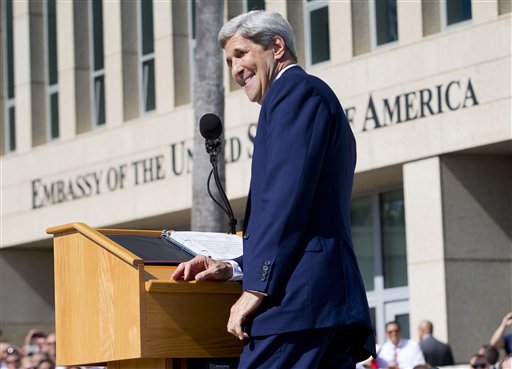 HAVANA (AP) — The blazing Caribbean sun rose Saturday on a U.S. flag flying over Havana for the first time in 54 years and people discussing political reform with an openness that once would have been unimaginable in Cuba.

Speaking before the raising of the Stars and Stripes at the newly reopened U.S. Embassy, Secretary of State JohnKerry called for systemic political change on the island, a topic that remains taboo here despite a series of economic reforms and the reestablishment last month of diplomatic ties severed during the Cold War.

“We remain convinced the people of Cuba would be best served by genuine democracy, where people are free to choose their leaders,” Kerry said, going on to call for responsive institutions and independent civil society in this single-party state.

In a series of interviews across Havana, Cubans told The Associated Press that they also welcomed Kerry’s call, openly discussing their desire for more democracy without the requests for anonymity or slow measuring of words that once were nearly universal when discussing political change.

“Of course we Cubans aspire to more democracy, more liberty and more of everything, because the truth is that life here is really hard,” said Roger Granado, a 44-year-old masseur who lives in the working-class Cerro neighborhood in south Havana.

President Barack Obama made a milder call for change in Cuba when he announced the new U.S. policy of engagement on Dec. 17 in a speech broadcast live on state TV here. And in 2002, former President Jimmy Carter addressed Cubans in an unprecedented hour of live, uncensored television — telling them their country did not meet international standards of democracy and repeatedly promoting a grass-roots campaign for greater civil liberties.

Shortly after that 2002 broadcast, a 22-year-old woman selling black market cigars to tourists in Old Havana would only give her first name, Alejandra, when she was asked her opinion of Carter’s call for greater liberties.

“People are afraid to talk openly about these things,” she told an AP reporter. “We’re not sure what we can say anymore without getting in trouble.”

Stopping as he strolled Friday night through Old Havana, not far from where Alejandra spoke, 50-year-old nurse Esbaldo Rodriguez shared his name and occupation before confidently saying “I think it’s logical that Kerry talks about those ideas, democracy, etc.”

“For us it’s a drop of hope, it’s something we weren’t expecting.” Rodriguez said. “It’s logical and for me it’s like a dream, what happened today and on Dec. 17, and now we have to wait to see it become reality.”

Sofia Granda, a 62-year-old retired state worker, agreed: “Everything he said about liberty, human rights, democracy, didn’t surprise me and I like it,” she said after watching Kerry walk through Old Havana Friday afternoon.

Retired Cuban diplomat Carlos Alzugaray said Friday’s events “had a great impact on people, who became enthused and started talking much more easily about those themes,” of democracy and liberty.

Cubans have felt increasingly free in recent years to complain about the country’s stagnant economy, bureaucracy and the difficulty of life in a centrally planned economy.

Far less common are open complaints about Cuba’s leaders and its political system, which allows people to vote directly only for low-level municipal posts.

Cuban officials describe the system as a form of true democracy that is “perfectible,” a euphemism ordinary Cubans interpret as a sign that the government is planning small-scale political reforms in the coming years while retaining Communist Party control.

The Cuban government rejects U.S. calls for political change, citing the long history of American interference with Cuban domestic affairs and blots on the United States’ own record on civil liberties.

Addressing reporters with Kerry after the ceremony, Foreign Minister Bruno Rodriguez responded by citing U.S. human rights transgressions — from police shootings of black men to mistreatment of prisoners at Guantanamo Bay, the U.S. naval base on Cuba that the government says must be returned.

By Saturday morning, as the giddy reaction to the flag-raising ceremony wore off, many Cubans were leavening their praise of Kerry with criticism of the U.S. that echoed Rodriguez.

“What happened yesterday was transcendental, that’s true,” said Rolando Quevedo, a 67-year-old retired driver for a state company. “But I don’t like the cynicism of the Americans when they come here to talk about human rights and democracy. What are they talking about? What are the rights of the blacks they’ve killed in these past months?”

“Let the Americans come and bring the good but not the bad,” Quevedo continued. “The majority of Cubans don’t want to change our system.”

Michael Weissenstein on Twitter: https://twitter.com/mweissenstein.
Copyright 2015 The Associated Press. All rights reserved. This material may not be published, broadcast, rewritten or redistributed.