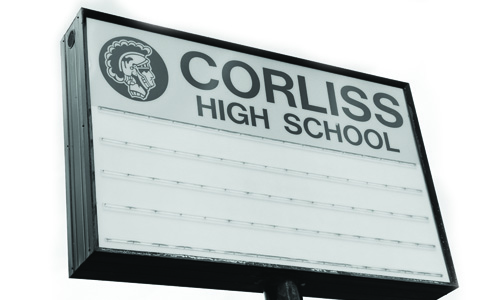 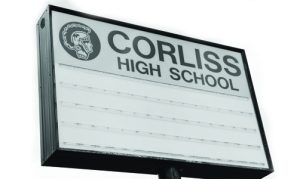 Since its inception in 1975 George Corliss High School, 821 E. 103rd St., has stood alone as a neighborhood school until this month when Pullman College Prep High School moved into the building.

By Wendell Hutson
Special to the NNPA from the Chicago Crusader

After initially saying its long-term plans were not to replace neighborhood schools with charter schools, this month Chicago Public Schools posted an Request for Proposals on its website for more charter operators.

This follows the closure of 50 underutilized schools by the nation’s third largest school district, which also slashed many school budgets. But CPS’ move to increase charter schools is not surprising to the Chicago Teachers Union.

“CPS continues to mislead parents and the public about its revenue stream, school utilization rates and its slow march toward privatization. Clearly, with the new RFP for more charters, CPS is accelerating its plans to gut our public school system,” said Stephanie Gadlin, a spokeswoman for the CTU. “This is a smack in the face to the thousands of school children whose lives have been disrupted by the largest school closings in U.S. history.” However, CPS officials deny that they are slowly privatizing public education.

“CPS must provide every student in every community access to a high-quality education that prepares them for college, career and life. Just as we have worked to address our under-utilization crisis, CPS must also address the problem of overcrowding, as there are several neighborhoods within our district with more students than seats available at their local school,” said Becky Carroll, in a statement. “By issuing this state mandated RFP, as CPS has done for the last 10 years, our goal is to seek out potential proposals to create more high quality school options for parents, and this is merely one step in that process.” For the last decade CPS has issued RFPs seeking information from charter operators, school district officials contend.

Among the things the RFP asked applicants is to demonstrate the capacity to run high quality new charter schools. Last school year there were more than 100 charter campuses within CPS’ portfolio of 681 schools. And non-profit organizations and for-profit companies run most charters.

And while the RFP stops short of identifying how many more charters CPS is seeking, it does seek ideas from applicants wishing to open schools over the next two years. State law allows each district to make their own process for receiving proposals for charters.

Most of the 50 schools the school district closed were in Black and Hispanic communities on the South and West Sides. But the RFP specifically requested ideas from applicants about opening schools on the Northwest and Southwest Sides, although suggestions for other neighborhoods would be considered, according to the RFP. One requirement stated in the RFP is for potential charter operators to demonstrate their ties to communities for which they would like to open a school.

“Applicants must provide evidence of parent and community demand and support,” according to the RFP. Since its inception in 1975 George Corliss High School, 821 E. 103rd St., has stood alone as a neighborhood school until this month when Pullman College Prep High School moved into the building. Now the charter school occupies half the building with nearly 100 freshmen students. Alderman Anthony Beale (9th) is an alumnus of Corliss and said declining enrollment forced “some creative ways to keep (Corliss) open.”

According to CPS data, Corliss had an enrollment last school year of 558 even though the school could hold up to 2,000 students.