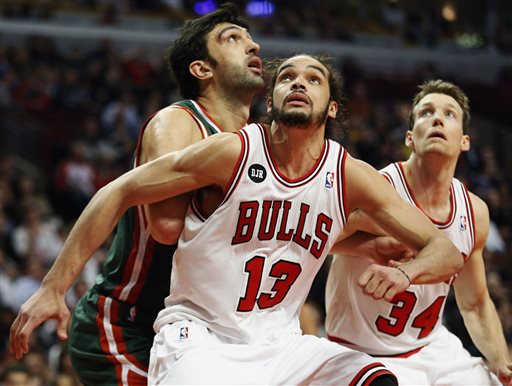 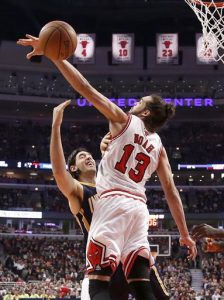 Less than two months after a landslide victory in balloting for the league’s defensive player of the year, Noah was the only player to receive more than 100 first-team votes and earn more than 200 points for the team. Noah received 105 of 123 possible votes, while George had 65 votes. The rest of the first team consisted of Clippers guard Chris Paul, Oklahoma City forward Serge Ibaka and Golden State swingman Andre Iguodala.

It’s the second consecutive year Noah was chosen to the first team.

Four-time league MVP LeBron James and defensive player of the year runner-up Roy Hibbert were both on the second team.

Noah dominated on the defensive end this season, joining Andre Drummond of Detroit and Anthony Davis of New Orleans as the only players in the league to average at least 10.0 rebounds, 1.5 blocks and 1.2 steals.Noah finished sixth in the league in rebounding (11.3), 12th in blocks (1.51) and helped the Bulls hold opponents to 43.0 percent field goal shooting, the second-best mark in the league. He also had 1.24 steals per game.

George, widely considered one of the league’s best two-way players at age 24, finished fifth in the league in steals (1.89) and was the only player in the NBA to average at least 6.5 rebounds and 1.8 steals.

Paul received 64 first-team votes after winning his sixth steals title (2.48). Ibaka made his presence felt in the Western Conference finals. After getting beaten twice in San Antonio without him, the Thunder won the next two games on their home court with Ibaka. The Spurs eventually won the series 4-2.

Iguodala averaged 1.5 steals as the Warriors jumped from No. 19 in defense in 2012-13 to 10th this season. James and Iguodala each received 57 first-team votes but Iguodala had 14 more second-team votes to edge out James for the final spot on the first team.

Indiana and Chicago were the only teams with two players on the list, which is selected by a panel of 123 sports writers and broadcasters in the U.S. and Canada.

Jackson fined $25,000 for tampering with Fisher