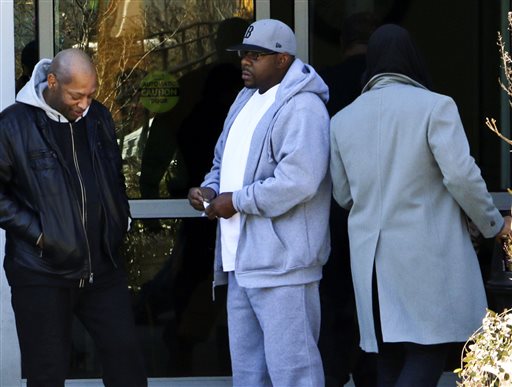 Entertainer Bobby Brown, center, stands outside of Emory Hospital in Atlanta where his daughter Bobbi Kristina Brown was being treated on Thursday, Feb. 5, 2015. (AP Photo/Ron Harris)

(Times Live) – The 22-year-old aspiring singer was recently moved to hospice care – five months after she was found unresponsive in her bath – and, after a picture of her in the facility was shopped for sale, relatives of her late mother, Whitney Houston, have intervened to restrict access to her bedside.

Sources told TMZ the security team at the hospice informed Whitney’s family there was evidence incriminating a Brown family member as the person who took the picture, and Bobbi Kristina’s estate made the decision to ban the Browns on that basis. It is said the family know who is responsible for the leak, but they have declined to go public with their identity.

However, Brown is still able to see his daughter.

Bobbi Kristina’s aunt Leolah Brown took to Facebook on Friday after several outlets, including Entertainment Tonight and TMZ, confirmed they were offered the photos and vowed to expose the person behind it.

The Endless Fall of Suge Knight

APNewsBreak: Cosby Said He Got Drugs to Give Women for Sex