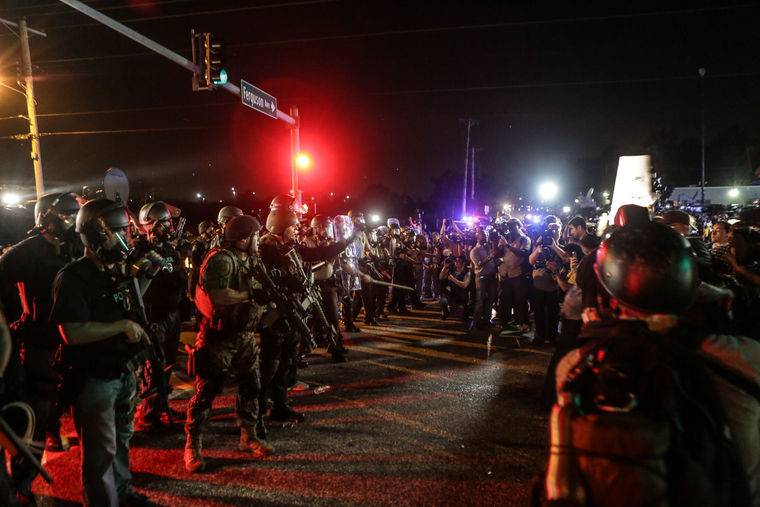 Protestors face off with police in Ferguson, Mo., after a grand jury decided not to indict Officer Darren Wilson. (Photo by Lawrence Bryant/St. Louis American)

WASHINGTON (NNPA) – Long after the St. Louis County Prosecutor Robert M. McCulloch announced Officer Darren Wilson will not be prosecuted in connection with the killing of unarmed Ferguson, Mo. teenager Michael Brown and burning tempers and flames had subsided, African American leaders were still expressing their disappointment in a criminal justice system that failed Brown.

“It has been fairly obvious from the beginning that the predominate belief in Ferguson and St. Louis was that Darren Wilson, the killer of Michael Brown, was not going to be indicted by a Bob McCullough-led grand jury,” Jesse Jackson said in a statement. “In a rambling statement of the grand jury’s process and conclusion – which did little to inform – Bob McCullough acted in the capacity of a defense attorney who misused the grand jury process ‘as a trial’ without professional legal cross-examination.”

Jackson continued, “The issue is not the unfortunate and unwise violent protests that followed.  The issue is the lack of federal uplift for the community even now.  The issue is the lack of federal enforcement of civil rights laws.  The issue is that Ferguson’s police and fire departments do not represent the people, are in violation of the law, yet it continues to receive federal funds.  Ferguson’s police department, fire department and contracts issued are all subsidized by the federal government –  including the equipment that was used to put down the protests – yet the federal government is still not enforcing its own civil rights laws.”

In a Huffington Post blog, Al Sharpton said: “If a grand jury is hearing evidence tantamount to what they would hear in a jury trial, then what is the point of a grand jury? In Ferguson, there are witnesses who say Brown had his hands up when he was shot. That should be enough probable cause to go to trial to then determine if Officer Wilson is guilty or not. It is at trial that he can then defend himself and his attorneys can present their own witnesses and their own defense.”

National Urban League President Mac H. Morial said, “We respect the grand jury’s decision in the course of due process of our legal system. We will, however, continue to fight for justice and accountability in the death of Michael Brown.  As such, we first and foremost urge the Department of Justice to continue a full and thorough investigation to determine whether federal civil rights charges should be filed against Officer Wilson, as well as to carry out federal reviews of police misconduct and implement key recommendations for police reform.  The excessive use of force by law enforcement in our communities is unacceptable, and we know that we cannot prevent future similar tragedies unless and until there is systemic change across the nation in the area of police reform.”

Charles Steele, Jr., president of the Southern Christian Leadership Conference (SCLC), said, “The grand jury’s decision not to indict Officer Darren Wilson is not an end but just another painful step in the long journey to justice, a journey that Dr. Martin Luther King, Jr., our founding president, and others walked with confidence and determination.

“Just as SCLC did not give up until the buses were desegregated in Montgomery, Ala. Under Dr. King’s leadership, we will not give quit until justice is the norm in America instead of the exception in the deaths of our unarmed Black men and women.”

Benjamin F. Chavis, Jr., president of the National Newspaper Publishers Association, a federation of approximately 200 Black Newspapers, said: “(The) announcement that the grand jury decided not to indict Ferguson, Mo. Police Officer Darren Wilson who killed unarmed 18 year-old Michael Brown in August 2014 is yet another systematic and tragic slap in the face of equal justice in the United States… We are the “Voice of the Black Community” and the NNPA will not be silent or rest until there is justice in the Michael Brown case and other cases of racially-motivated police killings and violence in our communities across the nation.”

The NAACP announced that will initiate a 7-day, 120-mile march from Ferguson, Mo. to Jefferson City, the state capital, on Saturday, Nov. 29.

“The death of Michael Brown and actions by the Ferguson Police Department is a distressing symptom of the untested and overaggressive policing culture that has become commonplace in communities of color all across the country, said NAACP President Cornell William Brooks.

“Our ‘Journey to Justice: Ferguson to Jefferson City’ march is the first of many demonstrations to show both the country and the world that the NAACP and our allies will not stand down until systemic change, accountability and justice in cases of police misconduct are served for Michael Brown and the countless other men and women who lost their lives to such police misconduct.”

Melanie L. Campbell, President and CEO of the National Coalition on Black Civic Participation, said, “(the)  decision by the grand jury in Ferguson, Mo. to not indict officer Darren Wilson in the shooting and killing of Michael Brown who was unarmed is a travesty of justice.  Further, we believe the St. Louis County Prosecutor Attorney Robert McCulloch’s gross mishandling of this case is inexcusable…We join the civil rights and social justice community in a call for an end to racial profiling of our young Black men and women who are losing their lives across the country at alarming rates at the hands of police officers who are sworn to protect and serve.”

Attorney General Eric H. Holder mentioned that there are two separate Ferguson-related investigations underway, one into the shooting of Michael Brown and one into the broader conduct of the Ferguson Police Department.

“I want to emphasize that we have two investigations that are ongoing,” Holder stated Tuesday. “As I’ve said many times before and reiterated in my statement last night, the department’s investigations will continue to be thorough, they will continue to be independent and they remain ongoing. They will be conducted rigorously and in a timely manner so we can move forward as expeditiously as we can to restore trust, to rebuild understanding and to foster cooperation between law enforcement and community members.”

“The grand jury’s decision does not negate the fact that Michael Brown’s tragic death is part of an alarming national trend of officers using excessive force against people of color, often during routine encounters. Yet in most cases, the officers and police departments are not held accountable. While many officers carry out their jobs with respect for the communities they serve, we must confront the profound disconnect and disrespect that many communities of color experience with their local law enforcement.

“The ACLU will continue to fight for racial justice. We must end the prevailing policing paradigm where police departments are more like occupying forces, imposing their will to control communities. This ‘us vs. them’ policing antagonizes communities by casting a blanket of suspicion over entire neighborhoods, often under the guise of preventing crime.”

Tough to Make a Case Against Police in Shootings