OUSD is No Longer Publishing its COVID Data 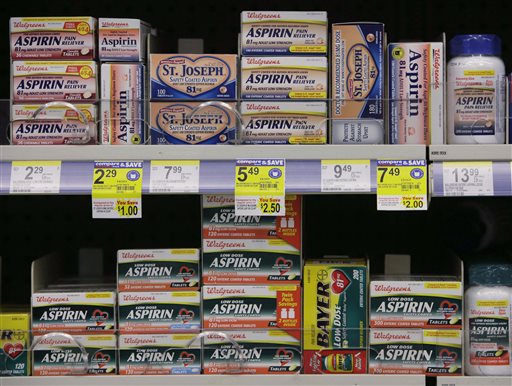 This Tuesday, Aug. 11, 2009 file photo shows packages of aspirin on the shelves of a drugstore in Chicago. In results published in the Journal of the American Medical Association on Tuesday, March 17, 2015, aspirin users were less likely than nonusers to get colon or rectal cancer if they had genetic traits found in about 90 percent of the participants. (AP Photo/M. Spencer Green)

CHICAGO (AP) — Researchers have identified common genetic traits that may explain how aspirin can help protect against colon cancer.

It’s too soon to recommend aspirin for colon cancer prevention and the needed genetic tests aren’t available outside of research. But they might be someday if future studies confirm the results.

Here are five things to know about the study:

HOW DID THEY DO IT?

The researchers pooled genetic and lifestyle data from 10 studies involving more than 17,000 people, about half had colon or rectal cancer. In those studies, participants were asked about various habits; more than one-third used aspirin frequently. They also had blood tests from which genetic material was analyzed. Previous studies have suggested aspirin might be protective but this one offers additional evidence of which genes may play a role.

Aspirin users were less likely than nonusers to get colon or rectal cancer if they had genetic traits found in about 90 percent of the participants.

Overall, frequent aspirin use reduced chances of developing colo-rectal cancer by an average of about 30 percent, compared with nonusers. The studies used different definitions of frequent use, but in most it was at least twice weekly for more than a month.

The results were published in Tuesday’s Journal of the American Medical Association.

In about 4 percent of the participants, frequent aspirin use did not appear to reduce risk and may even have had the opposite effect. These people had uncommon genetic traits and because the potentially risky markers were so uncommon, the researchers said additional studies are needed to confirm those results.

The genetic traits that seem to be protective are related to inflammation and the production of prostaglandins. Both are linked with cancer risk; aspirin reduces inflammation and is known to block prostaglandins, said senior author Dr. Andrew Chan of Harvard Medical School and Massachusetts General Hospital. Chan said that result means there’s likely a biological explanation for how aspirin might protect against cancer in people with those traits.

Frequent use of aspirin may cause intestinal bleeding and it is not generally recommended to help prevent colon or rectal cancer. Genetic tests that would show who has the potentially beneficial traits — or the possibly risky ones — are not yet available for regular use but they may be in coming years, Chan said.

AP Medical Writer Lindsey Tanner can be reached at http://www.twitter.com/LindseyTanner

Scientists Are Racing to Build a Better Diet Soda