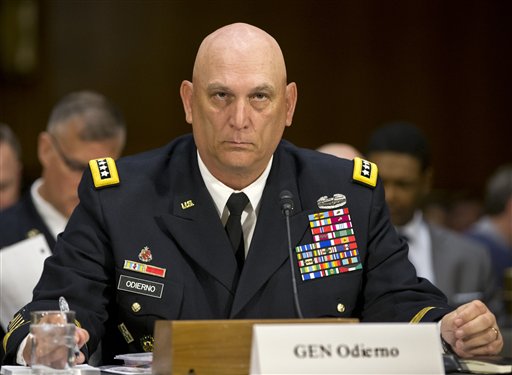 In this photo taken April 23, 2013, Army Chief of Staff Ray Odierno is seen during testimony on Capitol Hill in Washington. Odierno held a combat command before rising to four-star rank in the Army. (AP Photo/J. Scott Applewhite)

WASHINGTON (USA Today) — Command of the Army’s main combat units — its pipeline to top leadership — is virtually devoid of black officers, according to interviews, documents and data obtained by USA TODAY.

The lack of black officers who lead infantry, armor and field artillery battalions and brigades — there are no black colonels at the brigade level this year — threatens the Army’s effectiveness, disconnects it from American society and deprives black officers of the principal route to top Army posts, according to officers and military sociologists. Fewer than 10% of the active-duty Army’s officers are black compared with 18% of its enlisted men, according to the Army.

The problem is most acute in its main combat units: infantry, armor and artillery. In 2014, there was not a single black colonel among those 25 brigades, the Army’s main fighting unit of about 4,000 soldiers. Brigades consist of three to four battalions of 800 to 1,000 soldiers led by lieutenant colonels. Just one of those 78 battalions is scheduled to be led by a black officer in 2015.

Leading combat units is an essential ticket to the Army’s brass ring. Gen. Raymond Odierno, the Army’s chief of staff, commanded artillery units; his predecessor, Gen. Martin Dempsey, led armored units, and is now the chairman of the Joint Chiefs of Staff.

Agency: Woman Pushed Officer Who Then Punched Her

Parents Who Do the Unthinkable: Kill Their Children