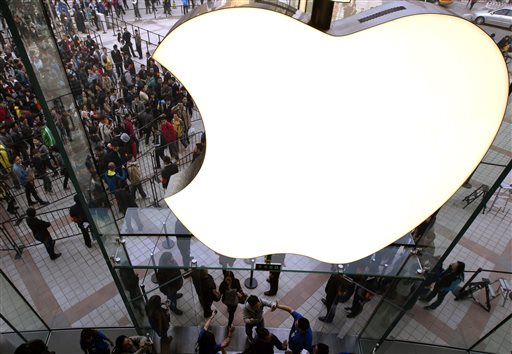 CUPERTINO, Calif. (AP) — Apple is teaming up with former nemesis IBM in an attempt to sell more iPhones and iPads to corporate customers and government agencies.

The partnership announced Tuesday calls for the two technology companies to work together on about 100 different mobile applications designed for a wide range of industries.

The applications, expected to be released this fall, will feature some of data-crunching tools that IBM Corp. sells to companies trying to get a better grasp on their main markets while scouring for new money-making opportunities.

IBM is also pledging to provide better security to reassure companies concerned about hackers stealing vital information off the mobile devices of employees doing less of their work on desktop and laptop computers.

Apple Inc. CEO Tim Cook said his company is turning to help from IBM because it doesn’t understand the needs of corporate customers as well as it does consumers. IBM CEO Ginni Rometty said the alliance will help her company by widening the audience for its technological tools, providing bigger returns on the roughly $24 billion that IBM has invested in data analytics.

“It’s a watershed partnership that brings together the best of Apple and the best of IBM,” Cook said Tuesday during an interview at Apple’s Cupertino, California headquarters. Underscoring the importance of the alliance, Rometty flew from IBM’s Armonk, New York headquarters to join Cook for the announcement.

“This is about two powerhouses unleashing the power of mobility for (businesses),” Rometty said. “This is going to remake professions and industries.”

By joining forces, Apple and IBM are hoping to build mobile applications that prove iPhones and iPads can serve many other business purposes besides checking email and keeping track of appointments. Cook says the devices are already used for work within all but a handful of Fortune 500 companies.

Both Apple and IBM are counting on their foray to boost their own revenue. The companies both have been facing concerns on Wall Street about whether they will be able to accelerate their revenue growth at a rate that will propel their stocks higher.

The worries about Apple’s future prospects have been easing amid widespread anticipation for an iPhone with a larger display screen this fall and the expected release of a smart watch with sensors to tracks people’s health. Apple’s stock has rallied from its recent lows reached in 2013 and is now approaching its all-time high. The shares shed a $1.13 Tuesday to close at $95.32, just 5 percent below their split-adjusted peak of $100.72.

The partnership underscores how technological upheaval can change allegiances. The notion of Apple and IBM helping each other out would have seemed inconceivable back in the 1980s and 1990s when they were bitter rivals in the personal computer market. The animosity ran so high that Apple famously skewered IBM as a soulless company devoid of new ideas in a commercial that evoked images of novelist George Orwell’s “Big Brother” figure in “1984.”

The hard feelings have faded away as technology has evolved and the companies have moved in new directions. IBM got out of the PC business when it sold that division to the Lenovo Group nearly a decade ago. Apple now makes far more money from its iPhones than it does from its Mac computers.

“That was a long time ago,” Cook said of Apple’s old rivalry with IBM. “This is two pieces of a puzzle that fit together perfectly.”

Apple’s late co-founder Steve Jobs, Cook’s predecessor, never concealed his disdain for IBM, but longtime Apple analyst Tim Bajarin of Creative Strategies is convinced Jobs would have hailed Tuesday’s news as another step away from the days when IBM’s mainframe computers dominated technology. “Steve would have loved this,” Bajarin said. “It shows that the post-PC era is in full swing now.”

Should Online Accounts Die When You Die?