Adrian Peterson Back in Pads and Moving Forward with Vikings
Advertisement 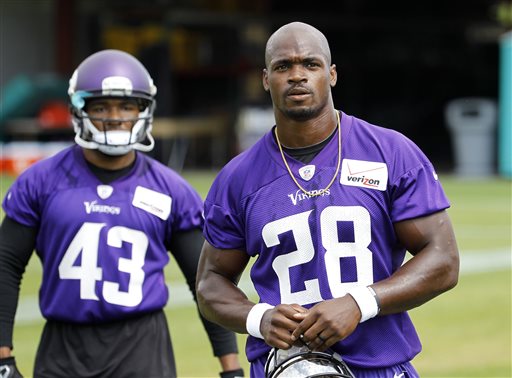 MANKATO, Minn. (AP) — Adrian Peterson burst through the line of scrimmage and veered toward the sideline as he headed up the field.

Safety Robert Blanton had the Minnesota Vikings running back in his sights and eased off the throttle as he went in to “thud” Peterson, looking to deliver a cordial bump during the team’s first training camp practice with players in pads. To Blanton’s surprise, Peterson lowered his shoulder and delivered a jolt to the fourth-year defensive back.

Most veterans dread the early days of camp and the first few hits that open the door to six months filled with jarring blows, aches and pains.

Not Peterson. He hadn’t felt the pop of the pads for more than 10 months, an exile brought on by child abuse allegations against him. With the case settled, his punishment over, his contract situation resolved and fans welcoming him back to the field, Peterson couldn’t help but be a little eager to finally get back to the business of football.

“I’ve been looking forward to it for a long time,” said Peterson, who missed the final 15 games of last season. “It was good to get the first day down. I feel comfortable. I didn’t feel sluggish or weighed down because of the pads. I felt pretty good.”

Vikings owner Mark Wilf said he was only too happy to see Peterson back on the field with a smile on his face after so much drama surrounding the team and its star player.

“Obviously he’s a unique talent and a good person,” Wilf said. “We’re happy he’s here playing for us. We can’t wait for the season to get going here.”

There were times in the offseason that it appeared like Peterson could be parting ways with the only NFL franchise for which he has played. A perceived lack of support from some in the organization, and the criticism that was heaped upon him by many fans and media when the allegations first surfaced, had Peterson thinking that it was time to move on.

But he was still under contract and the Vikings refused to entertain the idea of trading a player they believe can resume his role as the focal point of the offense, even as he passes the 30-year-old milestone that has spelled the beginning of the end for so many running backs before him.

As a show of faith, the Vikings also restructured Peterson’s contract to guarantee him $7 million next season in case of injury. It was the last in a series of efforts by the organization to smooth things over heading into a season with high expectations.

“He’s had a long history here with the Vikings and the community,” Wilf said. “We know what kind of person he is. That’s all in the rearview mirror as far as some of that stuff goes and we’re looking forward to him being a big part of our team going forward.”

While Peterson occasionally had doubts about the support he had in the front office, his confidence in his teammates never wavered. Throughout the last 10 months, not one Vikings player has gone on the record to express any reservations about Peterson, which has allowed him to step right back into a leadership role on the team.

“I don’t think it ever left,” Peterson said about his status in the locker room. “That’s the thing about the family I’m surrounded by. These guys, they’ve been supporting me. Such an unfortunate situation.

“But when it’s family and they know you,” he said, looking at a throng of media surrounding him, “some of you guys, I don’t know you so I wouldn’t pass judgment based off what I’ve heard or what I’ve seen if I didn’t know what type of person you are. That’s just the type of world we live in. These guys, they know me. They know what I’m made of.”

Tom Brady’s Lawsuit vs. NFL to be Argued in New York, Not Minnesota

Four-Time NBA All Star Vin Baker is Working at Starbucks