A Visit to ‘Ground Zero’ in Ferguson to Honor Michael Brown Jr.
Advertisement 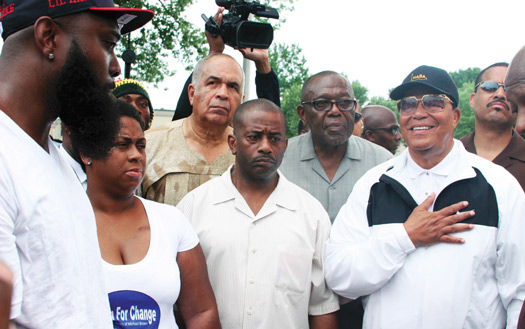 by Ashahed M. Muhammad
Special to the NNPA from The Final Call

FERGUSON, Mo. – It has been nearly one year since Michael Brown Jr., was shot dead in the streets of an apartment complex on Canfield Drive in Ferguson, Mo., by former police officer Darren Wilson. His August 9, 2014 death shocked and angered people to such an extent that the little town just outside of St. Louis became known as “Ground Zero” and sparked nationwide protests against police brutality.

Min. Farrakhan visited that location July 18, referring to it as “hallowed and sacred ground.” He spoke with many of the frontline activists as well as residents of the Canfield Green Apartments. They had a lot to say, and all said they were in support of “Justice Or Else!” Min. Farrakhan laid a wreath on the spot where Michael Brown’s dead body laid for over four hours on that sweltering hot day in August 2014.

Other Black leaders had been insulted and chided as opportunists only interested in photo opportunities and appearing before the news cameras when they came to Ferguson to visit the spot where Michael Brown Jr. was killed. That was not the case with Minister Farrakhan. The young members of “Lost Voices” embraced him fully and the community welcomed him with open arms. In fact, Min. Farrakhan’s visit was unannounced and no members of the controlled media were present.

“This is sacred ground,” said Min. Farrakhan. “We place this wreath in his name, because his is a name now that will never die, and Ferguson is a name that will never die and when the battle for freedom is finally won, history will say that the movement started in a little town in Missouri called Ferguson, with the lost life of a young man who knew something great was going to happen in his life, that the world would know him,” Min. Farrakhan said.

Those gathered around him nodded in agreement.

“Brother (Michael Brown) is not dead. Physically, he is gone from us, but spiritually he’s energizing a movement that will spread all over the world. For every evil deed done, there is a consequence, so don’t you ever think that the wicked will get away, in fact, the wicked may seem to prosper, but the scripture says, ‘God is not mocked’ and whatsoever a man soweth, the same shall he also reap,” said the Minister.

He asked them to join the #JusticeOrElse movement and gathering scheduled for October 10, 2015 to take place at the United States capitol in Washington.

Book Review: ‘Between the World and Me’ by Ta-Nehisi Coates