A Solid Start for Woods, the Lead for Leishman
Advertisement 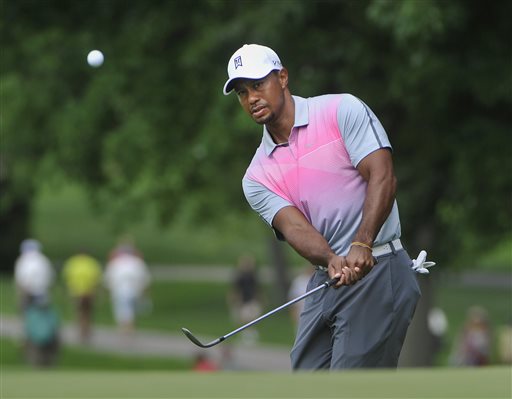 Tiger Woods watches his chip to the fourth hole, during the first round of the Bridgestone Invitational golf tournament, Thursday, July 31, 2014, in Akron, Ohio. (AP Photo/Phil Long)

AKRON, Ohio (AP) — Tiger Woods began his title defense in the Bridgestone Invitational with a perfect tee shot down the middle of the fairway and a shot that covered the flag until it settled 10 feet behind the hole. Three putts later, he walked off with a bogey.

Another day of trying to find his game? Not quite.

He followed with six birdies to atone for a few more mistakes, and wound up with a 2-under 68 that at least gave him hope that his game was turning the corner.

Marc Leishman had eight birdies in his round of 64 to take a one-shot lead after one day at Firestone, and more than one-third of the field in this World Golf Championship broke par in soft, relatively gentle conditions.

Even so, Woods remained the focus.

“I feel like I made some progress,” Woods said. “As I said, this is only my seventh round back. So it’s just going to take a little time. I’m starting to get in the flow of things. If you look at my iron shots into the holes today, a majority of them were pin-high. So I’m starting to get the feel back in my hands and get my trajectory under control.”

Then again, Woods also started well at the British Open two weeks ago. He opened with a 69, but then barely made the cut and finished 69th at the end of the week.

For such a big tournament, the Bridgestone Invitational got off to a quiet start.

Most of the attention was on Woods and his game, on who might make the Ryder Cup team, on who appears to be rounding into form for the PGA Championship, and on Dustin Johnson announcing he was taking a leave from golf for what he called “personal challenge” that will require “professional help.”

Here are five things to look for going into Friday’s second round at Firestone.

TIGER WOODS: This is only the third tournament for Woods since returning from his three-month break to recover from back surgery, so the sample size is small. But the second round is shaping up as an important one. Thursday was only the third time this year Woods opened with a round in the 60s (Dubai, British Open), and he failed to break par in the second round of both events.

What excited him about the first round is that he followed his two bogeys and one double bogey with birdies. It’s easier to clean up mistakes than to make birdies, so Woods was encouraged by making six birdies, two of them from tap-in range.

LEISHMAN: The affable Australian only has one PGA Tour victory, though he has been on a decent run. Leishman tied for eighth at Congressional a month ago, and then tied for fifth in the British Open in his recent start.

He found the right recipe for Firestone — keep the ball in the short grass.

“I drove the ball well. It makes this course a lot easier when you’re on the fairway,” Leishman said. “It’s pretty tough when you’re playing from the rough. Then, I hit my irons really well and was rolling the ball awesome. So it’s a pretty good combination for a tough golf course like this, something I can hopefully keep going.”

RYDER CUP: Ryan Moore, Charl Schwartzel and Justin Rose each were one shot behind at 66. Schwartzel is a former Masters champion. Rose won the U.S. Open last year. The interest over Moore is what he hasn’t done — play in the Ryder Cup.

He is No. 14 in the standings, and all it takes is one good week to play his way onto the team. Even after a chat with Watson when he was at Royal Liverpool didn’t change Moore’s mind about his chances to be in Scotland. He’ll have to earn one of the nine automatic spots.

BEWARE THE AILING GOLFER: Phil Mickelson didn’t arrive at Firestone until Wednesday night because he is recovering from strep throat. He opened with a 71 and already was seven shots behind. But Lefty has a history with playing well when sick.

He had food poisoning the week he won at Torrey Pines in 2001. He was hospitalized the night before he won at Doral in 2009 for his first WGC title.

“It just kind of slows your mind down,” Mickelson said. “You don’t rush things. Sometimes you play your best golf like that.”

DUSTIN JOHNSON: The first round was interrupted by news that Johnson is taking time away from the game to get help with his mental and emotional state. That means he won’t be at the PGA Championship. He won’t be in the FedEx Cup playoffs (he is No. 4 in the standings). And he won’t be playing the Ryder Cup.

It’s a blow to the American team not having someone with his power. Johnson went 3-0 in the last Ryder Cup at Medinah.

Zach Johnson looked at it another way.

“If anything, I just hope this is the start of something really, really positive,” he said. “And I don’t know what happened. I don’t know what the specifics are, nor should I know. That’s none of my business. I feel for him.”