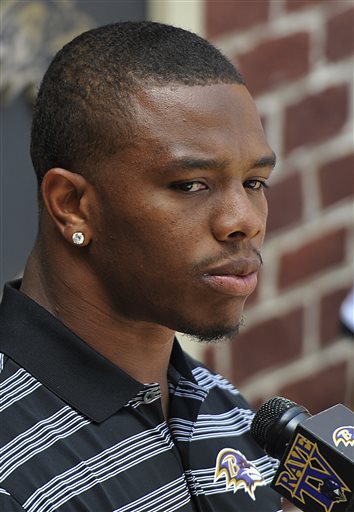 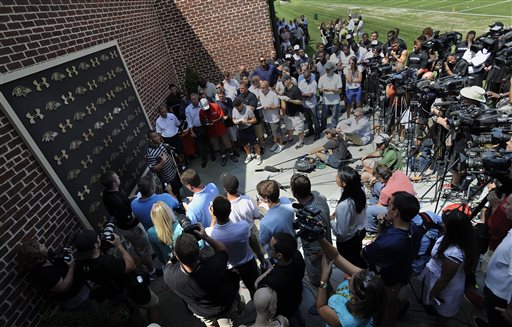 OWINGS MILLS, Md. (AP) — Ray Rice stepped to the microphone, took a deep breath and spoke for 17 minutes about what he called “the biggest mistake of his life.”

His arrest for domestic violence against his then-fiancee last February is something Rice figures will haunt him long after NFL career has ended.

The Baltimore Ravens running back was arrested on assault charges following a Feb. 15 altercation in New Jersey in which he allegedly struck Janay Palmer. Rice has been accepted into a diversion program, which upon completion could lead to the charges being dropped.

“My actions that night were totally inexcusable,” said Rice, who during Ravens training camp Thursday spoke publicly for the first time since receiving a two-game suspension from the NFL.

“My daughter is 2 years old now. One day she’s going to know the power of Google. Me having to explain that to her, what happened that night, that’s something I have to live with the rest of my life.”

Rice was referring to a grainy video in which he is shown dragging Palmer, now his wife, from an elevator at an Atlantic City casino. He did not address the incident at an impromptu news conference in May, and although he refused to divulge details on Thursday, he dismissed the notion that he was provoked.

“I don’t want to keep re-living the incident. I’m trying to move forward,” he said. “What happened that night was a huge mistake, and that’s what I’ll keep it at. I don’t condone any of my behavior. I take full responsibility for my actions. My wife can do no wrong.”

Rice wore a Ravens polo shirt and a pained expression throughout the session. More than a dozen TV cameras were in place, some telecasting the interview live, and several of his teammates stood behind the throng to show their support.

Rice, 27, is the team’s career leader in total scrimmage yards and ranks behind only Jamal Lewis in total yards rushing. But this press conference wasn’t about football.

This was about apologizing for actions that he insisted were one of a kind.

“It was the first time it ever happened,” he said. “I’ve never had a problem with domestic abuse. This was a one-time incident.”

In addition to the two-game suspension, Rice was fined three paychecks totaling more than $500,000. There have been reports that the fine was too light. Rice declined to weigh in on that subject except to say that he would have accepted whatever penalty the NFL deemed fit.

“No football games and no money was going to determine what I have to live with the rest of my life. That punishment I received from the NFL, it hurts that I can’t play football,” he said. “I never planned to appeal any kind of punishment. So whether it was two games, four games, six games, eight games, I was going to own my actions and be a man about it and take whatever was given to me.”

Rice’s reputation has likely taken a harder hit than he has ever absorbed on the field.

“In some people’s eyes, Ray can do no wrong. That’s something I take pride in,” he said. “I know a lot of people out there have lost respect, maybe not like me anymore. But that’s my fault. I have to own that. That’s my battle each day.”

Rice also pleaded with his fans to make smart decisions.

“I still have kids out there wearing 27 jerseys, and I just want to tell them that please don’t make the mistake I did,” he said. “I always talk about one or two bad decisions and your dream can become a nightmare, and I was truly living a nightmare.”

“I’ve known Ray for a while. He’s a great guy,” linebacker Elvis Dumervil said. “We’re all human, we all make mistakes.”

Rice realizes how many people were hurt by his actions.

A Solid Start for Woods, the Lead for Leishman

Riley Speaks Out, Insists Heat Will be Competitive