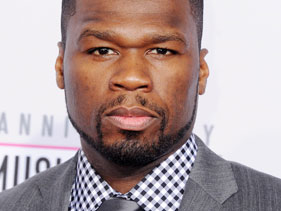 50 Cent has been charged with domestic violence by the Los Angeles Police Department on Wednesday (July 3), reports say. The rapper allegedly kicked the mother of his child and destroyed property in her Toluca Lake, California, condo last month. Fif took to Twitter after the allegations hit the Web, denying an arrest.

The L.A. City attorney said in a news release obtained by CNN that 50, born Curtis Jackson, faces one count of domestic violence and four counts of vandalism. “During an argument, Jackson allegedly began destroying the female’s property,” the prosecutor said. “Allegedly when the female locked herself in her bedroom, Jackson kicked-open the bedroom door and kicked her, causing an injury.”

Reports say that police were called to the scene on June 23, where they found broken chandeliers and furniture and clothes strewn all over the floor, along with a broken TV and lamp. But 50 Cent, 37, was not in sight. The damage is estimated at $7,100.