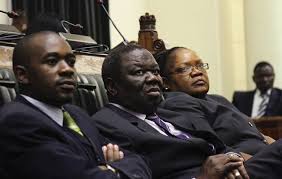 HARARE, Zimbabwe (AP) — Zimbabwe’s President Robert Mugabe issued an official proclamation on Friday setting March 16 as the date for the nation to vote on a new constitution ahead of national elections later this year.

A government notice formally published on Friday leaves a calendar month for distribution of the 160-page draft document and campaigning for a ‘Yes’ or ‘No’ vote. Independent advocacy groups say that is not long enough for a free poll to reflect the wishes of electors.

The draft constitution was completed on Feb. 6 after three years of disputes, bickering and constant delays and funding shortages. Democratic reforms to the constitution were a key demand of regional mediators after violent, disputed elections in 2008.

About 90,000 copies of the draft are being printed for distribution starting Monday.

Zimbabwe has nearly 6 million registered voters out of a population of 13 million.

China Emerges from Shadow of the U.S.