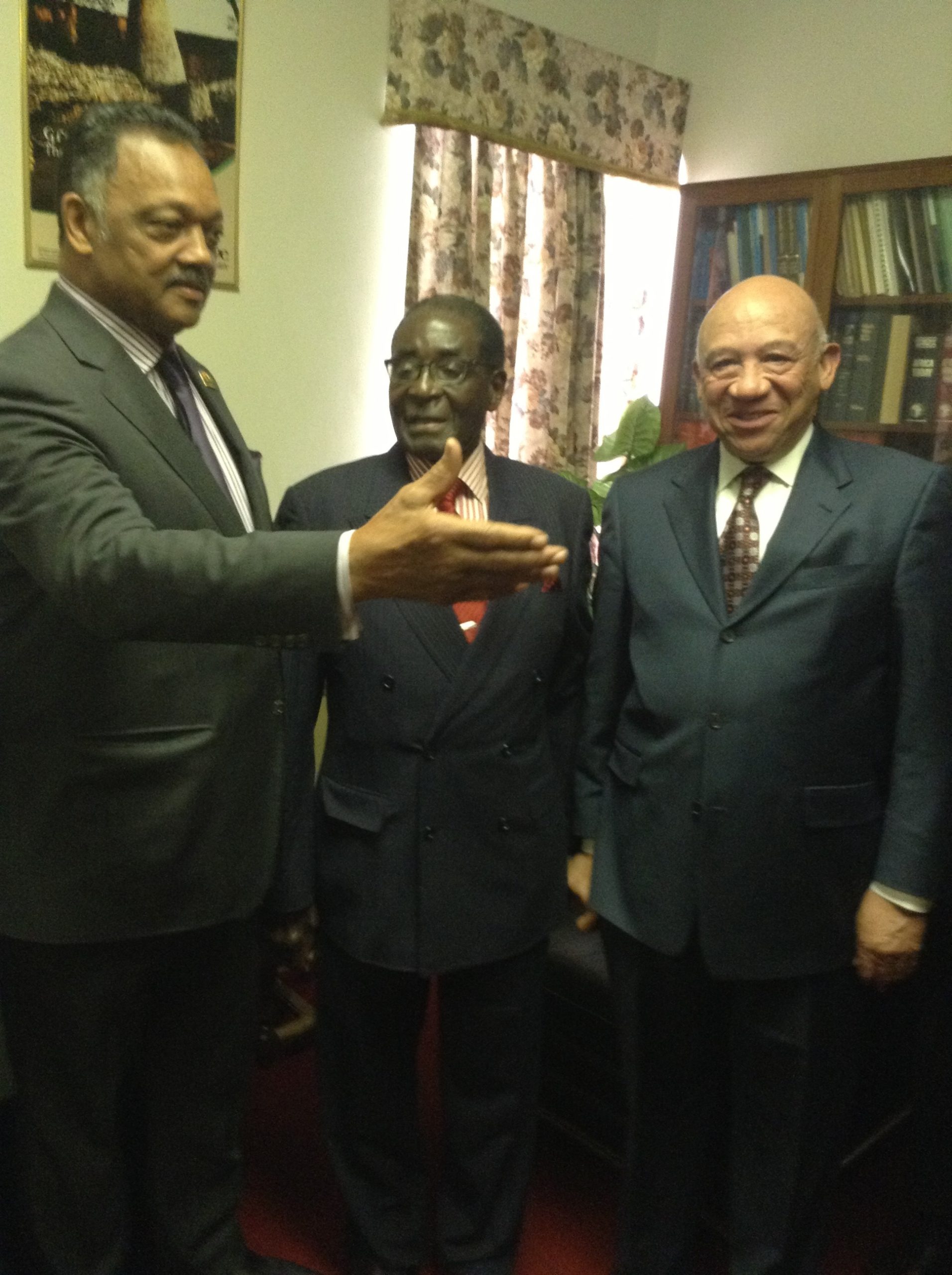 HARARE, Zimbabwe (NNPA) – With several low-key, but unmistakable gestures, the United States has signaled that it is moving toward normalizing relations with Zimbabwe, the former White minority-rule nation once known as Rhodesia.

In March, former United Nations Ambassador Andrew Young was dispatched by the Obama administration to meet with President Robert Mugabe. After the 2-hour meeting, Young told reporters that the State Department had sent him to Zimbabwe to let Mugabe know the U.S. is interested in repairing its strained relations with the mineral-rich country of 13.1 million people. Zimbabwe, slightly larger than the state of Montana, is bordered by South Africa on the south, Zambia and Botswana on the west and Mozambique on the north and east.

Last month, another civil rights veteran, Jesse L. Jackson, Sr., also held a 2-hour unofficial meeting with Mugabe in which the Chicago-based leader called for open and free elections and pledged to work for the removal of U.S. sanctions against Zimbabwe.

In the meeting, Jackson told Mugabe, who at 89 is the oldest sitting president on the continent of Africa, “When there’s growth and investment, everybody wins. And we want to be a part of helping remove…barriers that stand between our two countries.”

After controversial land reform and what the U.S. called flawed elections, the United States applied limited sanctions in 2003 against about 120 key individuals and 70 industries. Unlike broad sanctions against Iran, the restrictions, including a travel ban to the U.S. except for UN business, are narrowly targeted.

The U.S. action came on the heels of a decision in March by the 27-member European Union to remove sanctions against 81 officials and eight firms in Zimbabwe. The sanctions will remain in place against President Mugabe and 10 members of his inner circle as well as two firms.

The EU’s action was announced after 95 percent of Zimbabwean voters approved a new constitution that limits a president to two, 5-year terms, includes a bill of rights, prohibits the president from vetoing laws passed by the legislature and establishes an independent electoral commission. The election changes are not retroactive and will not prohibit Mugabe, the only leader the country has had since gaining independence from Britain in 1980, from running again in the next election, which is expected to take place in August or September.

The international community began withdrawing resources from Zimbabwe after the democratically-elected government decided to reclaim land from White commercial farmers, land that they said rightfully belonged to them.

The western media trumpeted stories about how unfair the White farmers were being treated under the new Black government.

However, Joseph M. Made, the former minister of lands, said the Black farmers were the ones aggrieved.

“What is very critical is that 6,000 White commercial farmers controlled prime agricultural land – about 15 million hectors [36 million acres] – denying a majority of Blacks an opportunity to also be involved in agriculture in prime areas where there’s better rainfall and better soil,” said  Made, who is now Minister of Agriculture, Mechanization and Irrigation Development.

In an interview, Made explained, “Our independence was the result of an armed struggle, primarily for two things: the right to vote and secondly, the land issue. We were a conquered people in terms of colonial legacy. We were defeated by the British. So, we took up arms to fight for that right to vote, which was denied to us, and the right to reclaim our land. It was a fight to reclaim what was rightfully ours. It’s not denying anything to anybody on racial grounds.”

“They have a sovereign right to do that, but there are consequences,” he said. “If you do it in a way that looks to the outside world like it’s chaotic, like the rule of law has been suspended, like there’s no real plan about making sure poor people get land as well as the wealthy people, there are consequences. Investors will walk away, tourists will stay away and that’s sort of the reality.”

“We were a conquered people and our land was taken,” he stated. “Naturally, we had to fight and we won an armed struggle to the right to reoccupy our land.”

Initially, Britain and the U.S. had agreed to compensate displaced White farmers as part of the 1979 Lancaster House Agreement that brought independence to what would later become Zimbabwe.

Once the farmers were not paid, the blame was shifted to the Mugabe government, not the countries that reneged on their pledges.

“We will not compensate for land that was never paid for,” Made said. “That land was taken by virtue of conquest – our forefathers were not given money. That [compensation] is the responsibility of the British.”

Made said most of the world minimizes the suffering Blacks experiences under White minority rule.

He said, “There’s all the talk about democracy, but we are the people who were denied the right to vote. We are the people who were told, ‘You don’t come through the front door, you go through that rear door.’ That was the system that operated here. We could not sit on the same bench with a White person in a park. The Black workers could not go on the same lift [elevator] as White people. It was in this city where you could not walk on the pavement – you had to walk where the cars were driving – as a Black person. We fought and on the day of independence, the Black people walked on the pavement en masse. That’s how the law was repealed.”

Skyscrapers that dot downtown Harare are rusty reminders of a gleaming city of a bygone era. An automobile trip from the airport to center city is a bumpy one because of deep potholes. Even the sidewalks, now that Blacks can walk on them, are in desperate need of repair.

President Mugabe said international sanctions have taken a toll on the country. But Ambassador Wharton said some of the wounds were self-inflicted.

“One of the things I hear Zimbabweans say is Zimbabwe never did anything wrong,” he recounted. “In fact, I think there were some mistakes. Wharton said one was the decision to in 1997 to make large payments to veterans of the liberation struggle. “I’m not saying that was right or wrong, but when they did that, the currency blew up,” he said. “I think they made a mistake in 1999 when they walked away from their debts to the IMF [International Monetary Fund] – they just stopped servicing those debts. That cut them off from new credit and debt relief.”

In addition, Zimbabwe can’t borrow from the World Bank or the African Development Bank because it stopped servicing those debts as well.

The Reserve Bank of Zimbabwe printed extra money to satisfy growing government debts, causing the inflation rate to soar from 32 percent in 1998 to an astonishing 11,200,000 percent by 2007. Following a decade of economic contraction, the economy grew by 6 percent in 2011 and slipped to 5 percent in 2012.

After a hotly contested presidential election in 2008, Mugabe entered into a power-sharing agreement with his chief political opponent, Morgan Tsvangirai, who became prime minister. Pressure is mounting on both to make sure the next election is a fair one.

Some businessmen, such as Elzie L. Higginbottom, president and CEO of Eastlake Management Group, Inc. in Chicago, see enormous investment opportunities in the country.

“When Zimbabwe was known as Rhodesia, it was the breadbasket of southern Africa. I like the size of the country – about 12 million people. I like the fact that it is an English-speaking country,” said Higginbottom, who has been traveling to Zimbabwe for the past four years. “The education level is very high – a 93 or 94 percent literacy rate. The other thing I like is that they have a basket of currency, but the predominant currency is the U.S. dollar.”

He added, “Zimbabwe is a mineral-rich country. It has platinum, gold, diamonds, chrome – it has all sorts of valuable minerals. It’s a peaceful country, it is predominantly one tribe and it’s set for redevelopment and improvement.”

Despite the sanctions, the U.S. maintains diplomatic relations with Zimbabwe. It has an ambassador in Harare and the country has a mission in Washington, D.C. Trade between the two countries has grown from approximately $100 million to $160 million annually over the past three years.

Ambassador Wharton, who says his goal is to see all sanctions on Zimbabwe lifted, predicts that investors will eventually flood the country.

“The country has extraordinary intellectual capital,” he said. “Robert Mugabe invested very well in education and health from the very beginning, from 1980 forward and the result is that you got an extraordinarily well-educated population – the highest literacy rate in sub-Saharan Africa. Culturally, Zimbabweans work hard, they’re honest, they’re ethical – they are extraordinary people.

“On top of that you got great mineral wealth – gold, platinum, chrome, diamonds, coal – and you got fantastic agricultural potential, which is currently underutilized. This country used to feed the entire region. You harness that intellectual capital with those natural resources and it’s in an extraordinarily attractive position for economic growth.”

Medicaid Disconnect between Leaders and Voters in South

Gosnell Case Looks at Both Sides in Abortion Debate