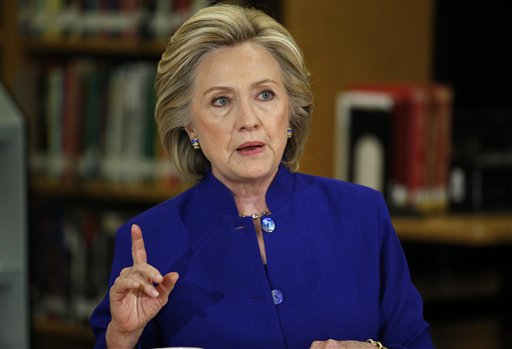 In this May 5, 2015, photo, Democratic presidential candidate Hillary Rodham Clinton speaks on immigration at an event at Rancho High School in Las Vegas. (AP Photo/John Locher)

(Politico) – Hillary Clinton is riding high in a new WSJ/NBC News poll, with a whopping 60-point margin over her nearest Democratic rival and commanding leads nationally against her would-be Republican opponents.

The poll found the former secretary of state garnering 75 percent of the vote in a potential Democratic primary. Her closest challenger, Vermont Sen. Bernie Sanders, received only 15 percent of Democrats’ support, while former Virginia Sen. Jim Webb and former Maryland Gov. Martin O’Malley were supported by fewer than 5 percent of respondents.

The results represent a resurgence of sorts for Clinton after Sanders had appeared to close the gap slightly in recent months, though it should be noted that the poll was of American adults, not of registered or likely voters — and that polling averages are usually a better indicator of the true state of the race.