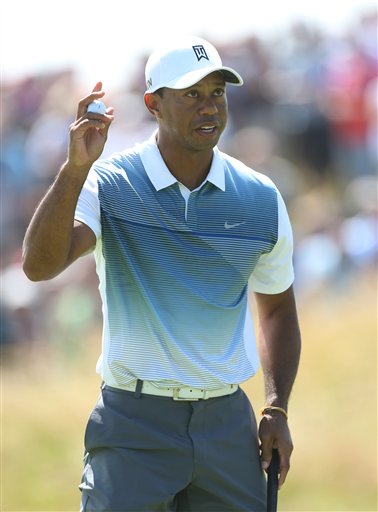 Tiger Woods of the US looks at his putt on the 9th green during the first day of the British Open Golf championship at the Royal Liverpool golf club, Hoylake, England, Thursday July 17, 2014. (AP Photo/Peter Morrison)

HOYLAKE, England (AP) — Tiger Woods was playing his second shot into the par-5 18th when he made a sudden stop in the middle of his swing Thursday at the British Open.

If nothing else, his back must really be better.

What made him stop — and then back off on the next shot — were clicks from cameras. The culprits appeared to be a few journalists using cellphones, and the second time Woods indicated toward the balcony of a corporate tent where two dozen people had phones out.

“There was a lot of cameras out there,” Woods said. “We were backing off a lot of shots, and a lot of people moving around. It was tough.”

The Royal and Ancient later put out a statement urging spectators to keep their phones on silent and reminded them that photos are not allowed during the tournament.

The number of cellphones wasn’t extraordinary. It certainly wasn’t as bad as the 2011 PGA Championship at Atlanta Athletic Club, or at the Memorial Tour a few years ago when Phil Mickelson sent a text to PGA Tour commissioner Tim Finchem that phones were out of hand. Mickelson withdrew.

Perhaps the worst abuse of cellphone pictures was at Royal Liverpool in 2006. It was so bad that the R&A banned mobile devices from The Open for the next five years. They were allowed again two years ago. For this British Open, the R&A has encouraged fans to bring mobile devices to take advantage of its app and Wi-Fi on the course.

Woods was asked about the R&A urging fans to bring phones and tablets.

MICKELSON’S START: Phil Mickelson has been saying it for months: His score isn’t reflective of how close he feels he is to playing well.

He shot 74 on Thursday, eight shots away from the lead. Even so, Mickelson said he had better control of the ball that he’s had in a long time. He played in the tougher afternoon conditions. And he’s not about to write off his chances of defending this British Open title.

“I remember back in ’04 at Troon I shot 74 the first day in pretty benign conditions came out the next day and shot 66 and got right back in it,” Mickelson said. “And I feel like I’m more on that side of the equation than having another round over par because I just think the way I’m starting to hit it and the way I feel with the putter is just totally different.”

Mickelson actually opened with a 73 at Royal Troon and finished one shot out of a playoff.

He gave away two shots on the final hole Thursday by hitting his second shot on the par 5 out-of-bounds. Mickelson didn’t even realize the shot landed out-of-bounds.

WATSON’S EYE: Five-time Open champion Tom Watson opened with a 73 and was headed to the practice range to iron out some problems.

Then, the 64-year-old put on his Ryder Cup captain’s hat as he contemplated the 69 shot by Tiger Woods.

Woods is a long shot to make the team on points having missed three months with a back injury. Watson wants him on the team, though he has said he needs to see some level of performance from the 14-time major champion.

“I would like to see Tiger do well for selfish reasons to see him get on the team,” Watson said. “And 3 under right now is a good start.”

Woods has played in every Ryder Cup since 1997 except for 2008, when he was recovering from knee surgery. He was a captain’s pick in 2010 at Wales.

SWEDISH TEMPER: Henrik Stenson is known to lose his temper on occasion. A week after winning the Deutsche Bank Championship last year, he smashed in his locker at Conway Farms out of fatigue and frustration.

He had a mini-meltdown again on Thursday.

After hitting his tee shot into deep rough left of the 17th fairways, and taking two hacks at it without much progress, the Swede was walking along when he slammed his wedge over his knee and snapped it in two. Bo Jackson would have been proud.

“I didn’t see anything. Did you?” Stenson said with a smile when asked which club was broken. “My gap wedge is going to need a little love after lunch.”

Stenson has a backup wedge for Friday.

GOOD START: Two-time heart transplant recipient Erik Compton shot a 1-under 71 Thursday in the opening round of the British Open, his first major since he tied for the runner-up spot behind runaway winner Martin Kaymer at last month’s U.S. Open.

Compton said he was made to feel right at home in his first British Open.

“It’s been pretty calm … I see smiles and people saying ‘good luck’,” he said. “But I don’t think people really know of me yet.”

Compton underwent his first transplant at age 12 due to an inflamed heart muscle and another 16 years later after driving himself to the hospital while having a near-fatal heart attack.

“I’m just a regular guy that has been through some serious stuff and earned a spot to play this year in this tournament,” Compton said. “I’m trying to make as much noise as I can. My game, hopefully, will slowly improve during the week.”

DIVOTS: An Englishman has not won The Open in England since Tony Jacklin in 1969. The low Englishman after the first round was Ashley Chesters, the European Amateur champion. … Jim Furyk is playing his first tournament since the U.S. Open. He shot a 68, ending a streak of 15 rounds without breaking par at the British Open. … Bryden Macpherson of Australia made par on his last four holes for a 49 on the back nine. He shot 90. … K.J. Choi shot an even-par 72, but there was nothing even about his back nine. He failed to make a single par — four birdies and five bogeys. “Birdie, bogey, birdie, bogey … I’ve never had that on my back nine before,” Choi said.