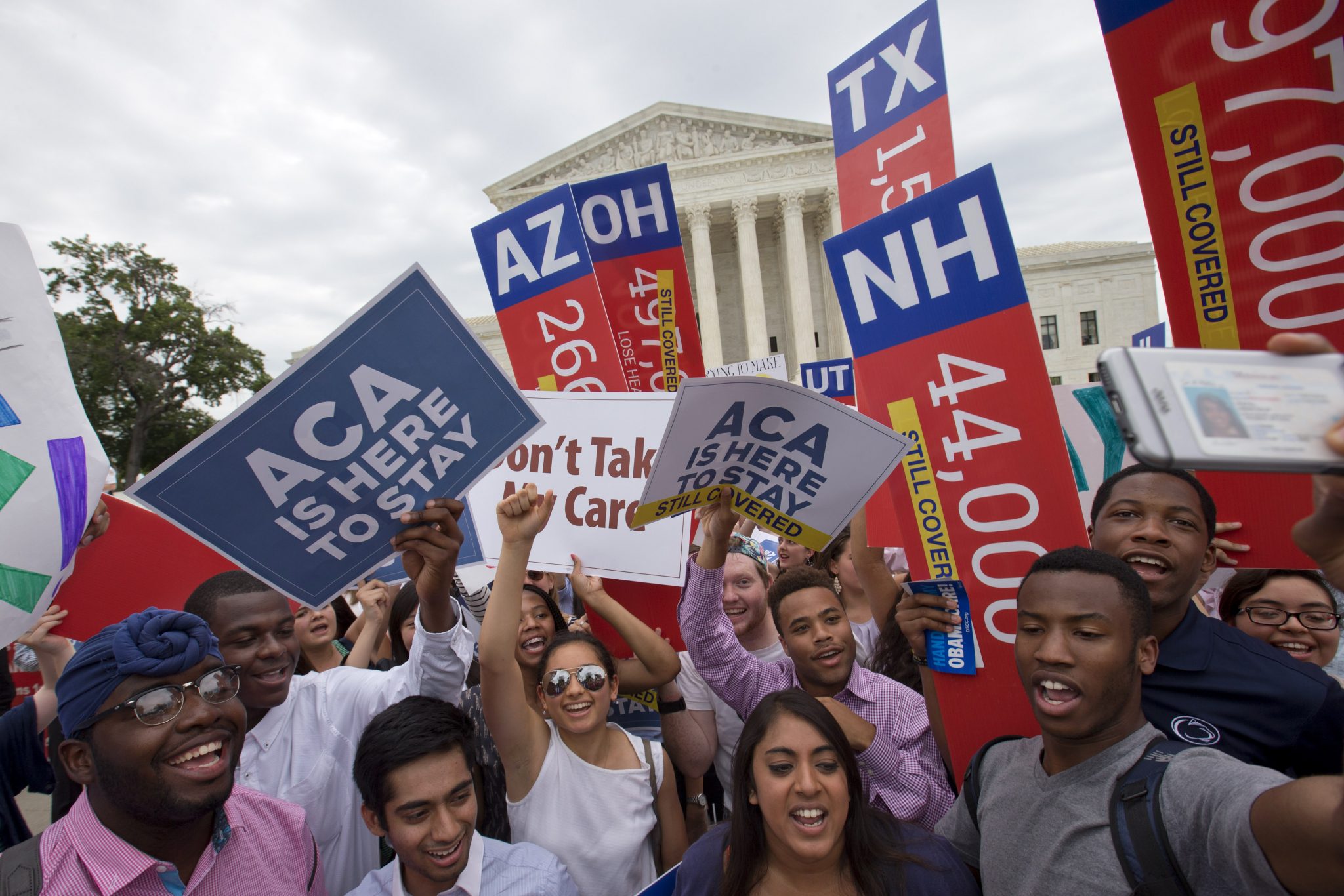 Students cheer as they hold up signs indicating the numbers of people in different states who would lose healthcare coverage, now over written with “still covered” stickers, after the Supreme Court decided that the Affordable Care Act (ACA) may provide nationwide tax subsidies, Thursday June 25, 2015, outside of the Supreme Court in Washington. (AP Photo/Jacquelyn Martin)

WASHINGTON (AP) — The Supreme Court’s resounding rejection of a conservative attempt to gut President Barack Obama’s health care overhaul won’t stop Republicans from attacking the law they detest. But now, their efforts will be chiefly about teeing up the issue for the 2016 presidential and congressional elections.

The court’s decision left GOP lawmakers stunned and uncertain about their next steps. Most agreed they would continue trying to annul the entire law and erase individual pieces of it, like its taxes on medical devices. Yet many also conceded they have little leverage to force Obama to scale back — let alone kill — one of his most treasured legislative achievements.

“Obamacare is fundamentally broken,” said House Speaker John Boehner, R-Ohio, who said repeal efforts would continue. But he declined to guarantee a vote on a replacement plan this year and said, “It’s very difficult to deal with it when you have a president that fundamentally disagrees with us. And so the struggle will continue.”

“We’ll continue to pick away at the law,” said Sen. John Barrasso, R-Wyo., a leader of Senate GOP efforts to craft a bill responding to a court victory that never came. “But ultimately our goal is to repeal and replace, and that’s not going to be possible until after the 2016 elections,” when Republicans hope for a GOP president.

That leaves Republicans mostly using efforts to void or dramatically weaken the health care overhaul to contrast their views with Obama’s for voters.

Yet though few would admit it, the court’s ruling caused many Republicans to exhale.

By leaving intact federal subsidies that help millions afford health care, the ruling lets Republicans bash Obama’s law in their 2016 campaigns without having to quickly help those who would have lost assistance. GOP lawmakers are divided over how — and even whether — to help those losing subsidies, and failure to do so could have created many angry voters.

“There isn’t some sort of, that sword of Damocles hanging over our heads that people are going to lose their care in 30 days or something,” said Rep. Greg Walden, R-Ore., who heads House GOP campaign efforts.

Republicans have promised to repeal and replace Obama’s law since its 2010 enactment, but have yet to rally behind a plan doing that.

Had the GOP-backed lawsuit by conservatives succeeded, the 34 states likeliest to lose subsidies included many that will be pivotal in next year’s elections. That included Florida, a key presidential state where a national high of 1.3 million people could have lost assistance, plus Pennsylvania, Illinois, Ohio, Wisconsin and New Hampshire, where GOP senators could face tight re-election battles and worried about constituents losing aid.

“The court has saved Republicans from themselves,” said former Rep. Tom Davis of Virginia, who once led the House Republican political organization.

It took just minutes for both sides to use the ruling for political fundraising. GOP presidential hopeful Jeb Bush, the former Florida governor, emailed for money to stop “the overreaches of the last six years,” while Senate Democrats warned that Republicans have “pledged to destroy Obamacare.”

The decision was a relief to the health care industry, which feared chaos in the insurance market, and business groups hoping Congress would now turn to making specific changes in the law to ease employers’ costs.

Savoring his triumph at the White House, Obama noted that his law has had five years to take hold and said: “This is not about the Affordable Care Act as legislation, or Obamacare as a political football. This is health care in America.”

Even so, Republicans had little reason to back off, especially those concerned about primaries from conservative challengers. An April Associated Press-GfK Poll showed that 71 percent of Republicans oppose the law, compared to 33 percent of independents and 14 percent of Democrats.

“We’ve got to put something on the president’s desk, not just a repeal but what are we going to do, what’s our alternative,” said Rep. Tim Huelskamp, R-Kan.

In the latest potential wedge between conservatives and Boehner, the speaker said he had not decided whether to use streamlined procedures that could avoid a Senate filibuster. Conservatives want to use those rules, but that device can be used only rarely and some Republicans want to save it for something Obama might sign, like deficit reduction.