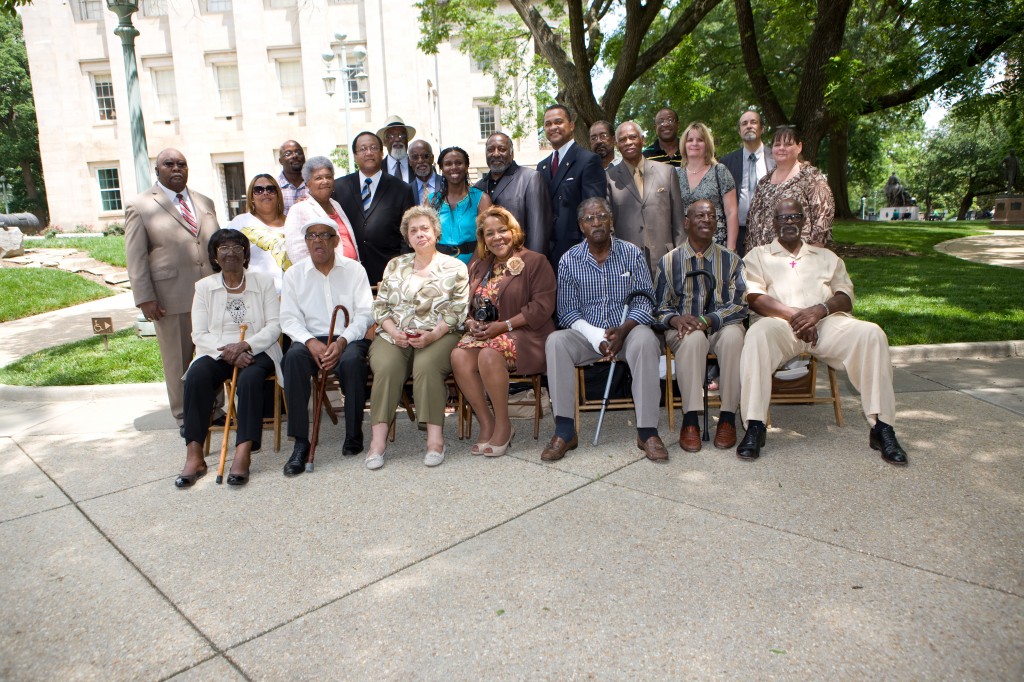 By Cash Michaels
Special to the NNPA from The Wilmington Journal

Referring to Stroud’s recent remarks in a local newspaper interview last week, Chavis told The Wilmington Journal: “Stroud’s latest admissions of his zeal to unjustly convict us is just another fact why the Wilmington Ten should be granted a pardon of innocence by Gov. Perdue. Stroud is still delusional 40 years later about basic fairness and equality under the law. I pray that Stroud will one day find it in his heart to repent for the wrong that he has done with respect to the Wilmington Ten.”

Pick White racists and malleable Blacks for Wilmington Ten jury were indeed his.

In a Nov. 28 Wilmington StarNews interview reportedly conducted in October, but published online only after the North Carolan NAACP’s Nov. 27 press conference in Raleigh calling on Gov. Perdue to pardon the Wilmington Ten, Stroud was reportedly shown copies of his handwritten notes from the June 1972 trial by a reporter, and confirmed their authenticity.

During jury selection for the June 1972 trial of the 10 activists charged with conspiracy in the firebombing of a White-owned grocery store during racial violence a year earlier, Stroud wrote “stay away from black men,” sought only “Uncle Tom type” Black jurors, and numerously wrote “KKK…OK” next to the names of several prospective White jurors.

But the former prosecutor denied that racism, as the North Carolina NAACP maintains, played any role in his jury selection. The “KKK…good” reference Stroud wrote in variations next to several white potential jurors’ names on the legal pad, for example, “…was a strike against the juror because of the potential of a hung jury,” Stroud said.

“I could have had an all-white jury, but I didn’t want to do that,” Stroud told The StarNews. “Why would I leave a KKK on the jury?”

Chavis said, “Facts are facts, and it is an irrefutable fact that all the members of the Wilmington Ten were completely innocent in 1972 of the racially-motivated framed-up charges filed against us by prosecutor Jay Stroud. It is a fact that the 4th Circuit U.S. Court of Appeals overturned our unjust convictions on December 4, 1980. Today in 2012, we, the Wilmington Ten, are still innocent of Stroud’s unjust and illegal fabrication.”

Stroud’s negative ratings for potential jurors were unmistakable. Next to several on his list, especially if they had a “B” for blacks written in front of their names or numbers, Stroud wrote, “Leave off” or “stay away from,” but never “good” as he did for the “KKK” jurors he wanted impaneled.

Stroud further told the StarNews that he wanted “conservative blacks” on the jury, later specifying that “Uncle Tom-type” means, “blacks that could be fair.”

Because a jury of 10 Blacks and two Whites was finally impaneled during the June 1972 trial, Stroud, citing “illness,” forced a mistrial to get a jury and judge more to his favor, the state NAACP says. His own handwritten notes on the back of a legal pad, weighing the advantages and disadvantages of a mistrial, betrayed his intent, the civil rights organization says.

A reporter for the StarNews said Stroud was asked about his mistrial notes, and while he didn’t deny he did write them, he also claimed that he really did get sick, so the paper never printed his answer.

Even now, if Stroud admitted that he forced a mistrial in the June 1972 proceedings because he didn’t like the mostly Black jury, he could be charged with a crime, legal experts say.

It was in the second trial in September that year –with a jury this time of 10 Whites and two Blacks – that the nine African-American males, led by civil rights activist Rev. Benjamin Chavis, and one White female, were falsely convicted. They were all sentenced to 282 years in prison, some of which they served, before they were released from prison early after immense public pressure.

In the StarNews article, former prosecutor Stroud still maintained that despite a federal appellate court’s 1980 ruling – which not only overturned all of the Wilmington Ten’s convictions, but also cited him specifically for gross prosecutorial misconduct – the Wilmington Ten were guilty, and deserved to go to prison.

“They got more than a fair deal as far as I’m concerned,” Stroud was quoted as telling the Wilmington newspaper. “I think they should have had to serve their sentences like any other convicted felon.”

Ironically in that same StarNews article where Stroud is convinced that the Wilmington Ten couldn’t have possibly been anything but guilty, he adamantly agreed that prosecutorial frame-ups do exist – against him.

When asked about his 12 convictions over the past six years, mostly in Gaston County, N.C. for charges ranging from domestic violence to repeatedly ramming cars because, the former prosecutor told a judge, “Satan was with [the drivers],” Stroud, who lost his license to practice law in 2008 replied, “I am not guilty of any of the charges that were leveled against me as stated in the warrants. All of the charges were false and fabricated.”

Jay Stroud did serve time in jail for several of those charges. He told the Gaston Gazettethat he’s suffered from a bipolar disorder since his time in college.

Attorney Irving Joyner, who, along with James Ferguson, the lead defense attorney 40 years ago for the Wilmington Ten, filed the pardon petition papers last May requesting that Gov. Beverly Perdue grant pardons of actual innocence to each member of the Wilmington Ten, was outraged by Stroud’s remarks..

“We have never presented any information regarding the Wilmington Ten case which has not been fully vetted and determined to be absolutely accurate,” Joyner, a law professor at the North Carolina Central University School of Law in Durham, told The Wilmington Journal.

“Jay Stroud did no more than acknowledge the obvious with respect to his authorship of the racially-inspired efforts to prevent African-Americans from serving on the Wilmington Ten jury. In the same handwriting, he also described his successful effort to fake an illness, misrepresent his medical condition to the court, and to deliberately perpetrate a fraud in Court, a criminal offense,” Joyner continued.

“The comments and notes, which Stroud made, speak for themselves, and further support the obvious conclusion that the persecution of the Wilmington Ten was racially inspired and constitutionally deficient.

“It is now up to the governor of North Carolina to determine whether she is going to correct an injustice, or stand on the side of a racist and illegal persecution in the name of the state of North Carolina.”

At the North Carolina NAACP’s Nov. 27  press conference, veteran civil rights attorney Al McSurely told reporters the trial tactics Stroud used against the Wilmington Ten were illegal, and that the State Bureau of Investigation should look into the matter, and then put the former prosecutor in jail.

North Carolina President Rev. William Barber, who blasted Stroud at the press conference for his “unconstitutional” and “racist” tactics to “frame” the Wilmington Ten, found his StarNews comments justification for further condemnation.

“The more we learn the truths about how race polluted and poisoned the unjust, unconstitutional and unethical prosecutorial acts utilized on this case by Stroud, to frame and falsely convict these young people, the more disturbing they are,” Rev. Barber exclusively told The Wilmington Journal.

“We have a crooked prosecutor who fostered a crooked persecution of innocent individuals, who now wants to admit on one hand his actions, and then on the other hand engage in a distressing revisionist rationale as to why he did what he did. North Carolina must see all of these facts for what they are and represent – calculated and sinister racism used in our court system.”

Rev. Barber added, “Only a pardon can begin to cleanse the depth of wrong being further revealed.”