Will Obama Save Immigration Reform or Kill It?
Advertisement 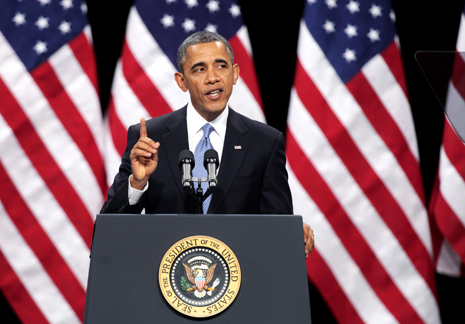 There is a growing sense that comprehensive immigration reform is now close to inevitable, that it won’t just die in Congress this time around. But on Tuesday, not more than three hours before President Obama gave a major speech in which he laid out the principles he wants to see in any legislation that makes it to his desk and declared, “It’s time to fix a system that’s been broken for way too long,” we saw how the whole endeavor could quickly collapse.

The world is different than it was in the middle of the aughts, the last time that leading Republicans and Democrats truly came together to work on comprehensive reform legislation. Back then, the G.O.P. establishment could foresee the consequences of standing in the way of reform, and of the Party branding itself as nativist, even as the Hispanic community was on the cusp of becoming vital to success in national politics. Now, they’ve lived through those consequences on more than one humiliating occasion. They’re ready to deal. And the forces that pushed hard against reform the last time around are, too. Talk-radio hosts might not be rushing to lead the charge for the compromise plan that eight Senators—four Democrats and four Republicans—announced on Monday, but they’re not apoplectic about it, either. Even Lou Dobbs, whose anti-illegal immigration fervor made him a star for a few years before it spiralled down into barely concealed racism and then, finally, birtherism, said Monday night that he had “to applaud the outline” that the senators had unveiled.

There’s one other thing that’s different, though: now, thanks in large part to the Hispanic vote, Barack Obama is President. That will make working for a bill harder for the Republicans who want to see something passed. It’s one thing to give up on some of the same principles the G.O.P.’s base fought so hard for just a few years ago, but doing so in partnership with Obama is something else entirely. The President’s endorsement—his very presence—can suddenly make almost any proposal toxic for a great many Republicans, and anyone who works with him may have some explaining to do come primary season. As a result, before Obama had so much as landed in Las Vegas to deliver his speech, even those Republicans who are in favor of reform were criticizing him for what he would say in it.