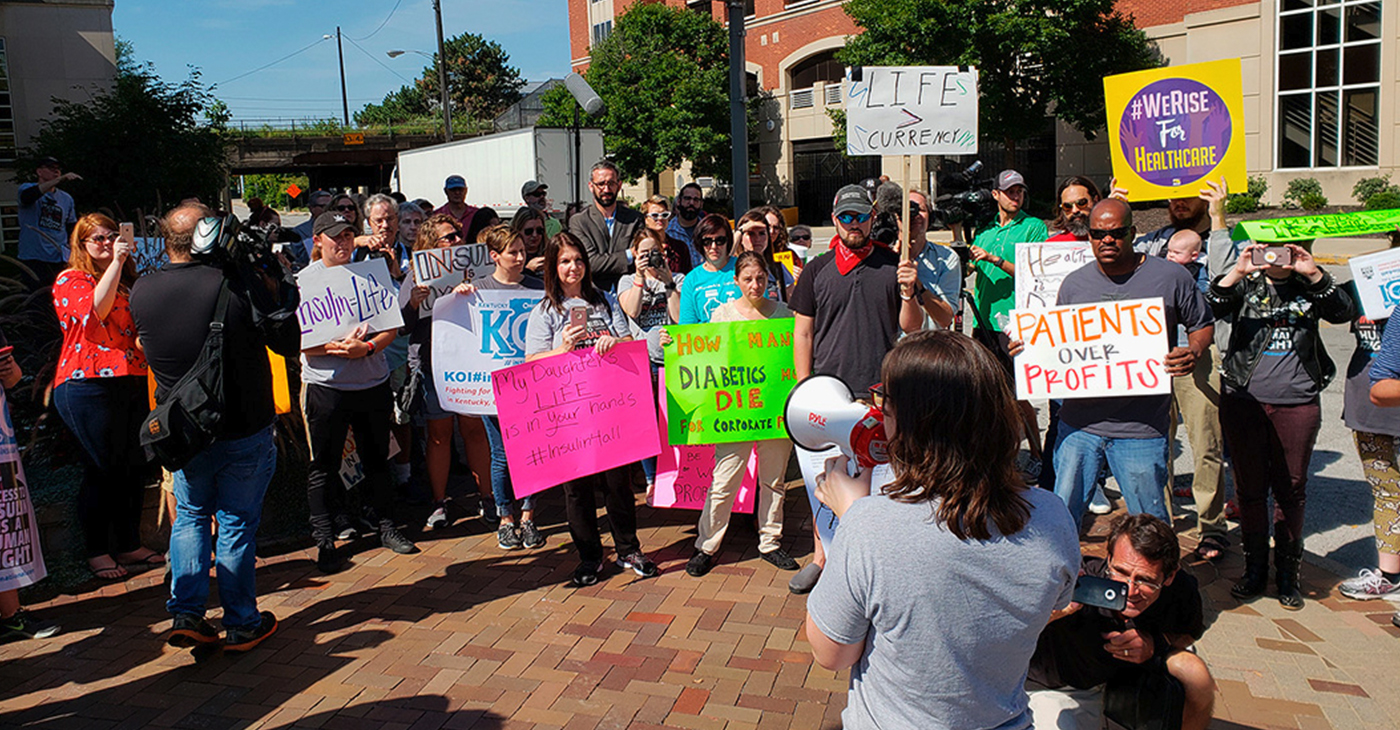 Angela Lautner knew her thirst was unusual, even for someone directing airplanes, outside in the Memphis summer heat.

“We had coolers of Gatorade and water for people to always have access to,” Lautner recalled of her job as a ground services agent. “But the amount of thirst that I felt was just incredible.”

She had no appetite and she lost an unusual amount of weight. Then after a trip to the emergency room, Lautner, who was 22, was diagnosed with  Type 1 diabetes. The diagnosis was life-changing.

To start, it meant that for the rest of her life she would require insulin injections every day to stay alive. Unlike  Type 2 diabetes, which can sometimes be controlled by diet, people with Type 1 diabetes need daily insulin injections to regulate their blood sugar.

Lautner’s diagnosis also meant she was no longer allowed to become a commercial airline pilot in the U.S. — a lifelong dream that she was training for in flight school at the time.

“I cried harder over losing my dream to fly than I did at the diagnosis of Type 1 diabetes,” Lautner said.

But after 18 years living with diabetes, Lautner now says the hardest thing about the diagnosis is accessing insulin — the expensive drug she needs to keep her alive. She has had to borrow money from her parents to pay for insurance; she has spent hours on the phone with drug companies; she has switched brands of insulin to save costs; and she even moved to a new state, Kentucky, with a more generous Medicaid plan.

Last year, Lautner noticed other people with Type 1 diabetes tweeting similar stories under the hashtag  #Insulin4All. She read the stories of  Shane Patrick Boyle  and  Alec Raeshawn Smith, two men who died because they could not afford their insulin. It was an epiphany.

“I thought, ‘My goodness, there’s more people than me. I’m not the only one out here,’” she said.

Since then, Lautner has joined a group of consumer activists, people who need insulin to live and are angry about the sky-high prices. They are putting pressure on the three main companies that make insulin: Sanofi of France, Novo Nordisk of Denmark and Eli Lilly and Co. in the U.S.

Taking On The Drugmakers

The cost of insulin  nearly tripled  from 2002 to 2013 and has  doubled again  since then. The list price is over $300 for a single vial of medicine, and most people with Type 1 diabetes need multiple vials every month to live. That cost is typically lower with insurance or with discount programs. Still, for some people the  price is unmanageable.

There’s been some action by lawmakers on the issue. In October, Minnesota’s attorney general  sued insulin manufacturers  alleging price gouging, and a  bipartisan caucus  in the U.S. Congress issued a report in November urging action to bring insulin prices down.

But prices are still going up, so consumer activists like Lautner are taking things into their own hands.

Nonprofit group  T1International, which advocates for Type 1 diabetes around the world, with a particular focus on insulin prices, has started holding rallies outside the Indianapolis headquarters of pharmaceutical giant  Eli Lilly and Co.

Lautner joined more than 70 people who came together to demonstrate there in September. They were asking for three things: transparency about how much it costs to make a vial of insulin and how much profit comes from each vial, and a commitment from the company to lower the list price of insulin.

Protesters hailed from at least 12 states, mainly Ohio, Illinois, Indiana and Kentucky, but also from as far away as New York. Lautner, who now lives outside Cincinnati, rented a school bus with a dozen others to make the 112-mile trip.

“Insulin is kind of the face of the drug pricing crisis in America,” said Elizabeth Pfiester, founder of T1International who has Type 1 diabetes herself. “We literally die without it,” she said. “We’re fighting for our lives.”

This was the third time the group had protested at Eli Lilly headquarters. Last fall, when the group held its first protest there, Pfiester said, it was “the first time where people living with Type 1 were able to physically stand and show that people are angry enough to come out.”

Eli Lilly declined a request for an interview, but in statement a spokesperson said, “We understand why people are making their voices heard.”

Protesting is one arm of their advocacy efforts; the group is also lobbying at the state and national level, and conducting online awareness-raising campaigns under the hashtag  #Insulin4All.

Advocacy At The State Level

Last spring, the fight got even more personal for Angela Lautner. She got a letter from her insurance company saying they were no longer going to pay for the insulin she was taking. They wanted to switch her to a different brand.

Lautner has found that the long-lasting insulin brand Lantus works best with her body; it keeps her blood sugars low, but not so low that she becomes dangerously hypoglycemic, risking death. But her insurer was dropping its coverage of Lantus in favor of a different long-lasting insulin, Basaglar.

“The problem that I immediately saw was that had not worked for my body,” Lautner said. “So I go into my doctor’s office with this letter and I’m like, ‘What am I going to do?’”

Lautner’s doctor connected her to Sanofi’s drug discount program, where she was able to get a month’s supply of Lantus for a couple of hundred dollars. So she decided to pay for the insulin herself.

“I’m fortunate enough to have an emergency fund,” Lautner said.

But she knows others aren’t so lucky.

This year, Lautner organized her own group of diabetes activists in Kentucky, Ohio and Indiana, called  KOI Insulin4All. They’ve met with legislators in all three states about establishing emergency insulin prescription refills and about making the cost of insulin more transparent.

There are similar groups starting up in Oklahoma, Pennsylvania, Minnesota and Illinois. In November,  activists protested outside  the Cambridge, Mass., office of Sanofi. All of them are pushing for the same thing — to make the voices of people with diabetes heard.

This story is part of a reporting partnership with NPR.

Mark Your Calendars for the 50th NAACP Image Awards

COMMENTARY: Actually, Your Vote is Worth A Lot