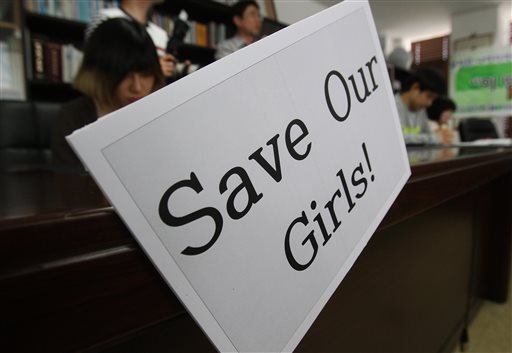 Christians pray during a service to support the release of kidnapped girls in Nigeria, at a church in Seoul, South Korea, Wednesday, May 14, 2014. Boko Haram, the militant group that kidnapped nearly 300 schoolgirls in Nigeria, said the girls will only be freed after the government releases jailed militants. (AP Photo/Ahn Young-joon)

by Craig D. Frazier
Special to the NNPA from the New York Amsterdam News

Last week, a number of local and international events occurred to mark that it has been more than 100 days since the abduction of the Chibok pupils.

In Manhattan, a silent candlelight vigil, organized by Nkechie Ogbodo, president of Kechi’s Project, was held across the street from the Nigerian consulate. Members of the organization called for the return of the Nigerian girls and were joined by faith-based leaders and community activist.

“We are praying and honoring them so they can stay strong, come back safely and have a chance to live whatever is left of their broken lives,” Ogbodo told the AmNews.

Since 2010, Kechi’s Project, a New York-based nonprofit organization, has empowered underprivileged and under-represented girls in Nigeria. The Nigerian native is responsible for spearheading multiple campaigns here in New York and across the globe that highlight disparities faced by young females in Africa.

“They are still missing, and we still don’t have answers. We promised them hope, yet hope is fast eluding them. Why is the world silent?” Ogbodo added.

The extremist group Boko Haram’s attempt to disenfranchise and subjugate the girls of Nigeria has strengthened her determination to do more for girls by expanding educational scholarships program in Nigeria.

In April, Boko Haram abducted 276 Nigerian girls, sparking an international outcry. Of the 276 girls kidnapped, 219 are still being held captive more than 100 days after they were first kidnapped. Borno State Gov. Kashim Shettima reported that 176 teachers have been killed and 900 schools destroyed in Borno since Boko Haram began attacking in 2011, because they see the community as a reflection of Western education.

The militants, known now as terrorists, have attacked throughout Nigeria, snubbing international demands to release the girls. The Associated Press reports that 60 students managed to escape from the thick jungle, but at least 20 others are ill and at least two have died.

“I stand in solidarity with all those taking part in vigils today to demonstrate that the world has not forgotten the girls who were so cruelly abducted from their school 100 days ago in Chibok, Nigeria,” said Ban Ki-moon, United Nations secretary-general, “I repeat my call for their immediate release and for an end to discrimination, intimidation and violence against girls whose only wish is to gain an education.”

For the first time, Nigerian President Goodluck Jonathan met with parents of the 219 kidnapped schoolgirls and classmates who escaped from their Islamic extremist captors. “Mr. President reassured them of the federal government’s determination and his personal determination to ensure that the girls that are still in captivity are brought out alive,” said Jonathan’s spokesman.

Boko Haram wants to swap prisoners for the girls. The president has refused.

Jonathan said the government wants to avoid a rescue effort that could lead to the girls being killed. “Anyone who gives you the impression that we are aloof and that we are not doing what we are supposed to do to get the girls out is not being truthful. Our commitment is not just to get the girls out, it is also to rout Boko Haram completely from Nigeria,” he told the parents. “But we are very, very mindful of the safety of the girls. We want to return them all alive to their parents.”