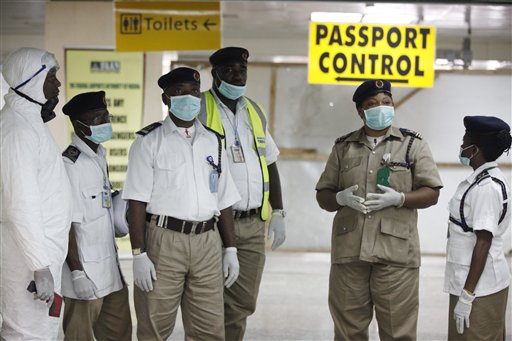 (Reuters) – Hundreds of troops deployed in Sierra Leone and Liberia on Monday under an emergency plan to fight the worst outbreak of the deadly Ebola virus, which has killed more than 826 people across West Africa.

Panic among local communities, which have attacked health workers and threatened to burn down isolation wards, prompted regional governments to impose tough measures last week, including the closure of schools and quarantine of the remote forest region hardest hit by the disease.

The hemorrhagic virus, which has no known cure, has infected more than 1,400 people in its first outbreak in West Africa, straining the capacity of under-funded health systems and aid groups to breaking point in one of the world’s poorest regions.

Despite pleas for help from aid groups, the number of cases is also creeping steadily higher in Guinea, where the outbreak originated in February. And Nigeria’s megacity of Lagos on Monday recorded its second case of Ebola in a doctor who treated U.S. victim Patrick Sawyer.
READ MORE

Europe in Push to Stop Violence Against Women