US Rep. Conyers Joins Suit to Get Back on Ballot
Advertisement 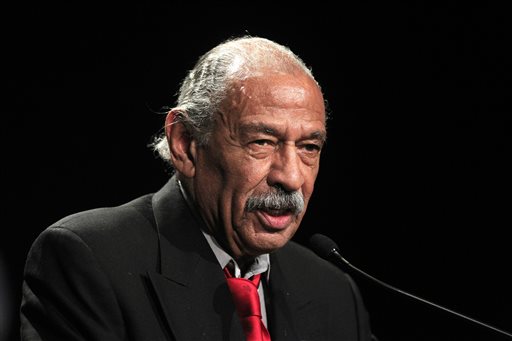 In this Nov. 6, 2012 photo, Rep. John Conyers, D-Mich., addresses supporters during the Michigan Democratic election night party in Detroit. Wayne County Clerk Cathy Garrett is expected to make her final determination Tuesday, May 13, 2014 on whether the longtime congressman should be on the Aug. 5 primary ballot. (AP Photo/Carlos Osorio)

DETROIT (AP) — Longtime Michigan Congressman John Conyers joined a federal lawsuit Thursday taking aim at the requirement that petition collectors be registered voters, as part of a larger challenge to an order removing his name from the primary ballot in August.

Conyers, who was first elected to the House in 1964 and represents a district including Detroit and several suburbs, joined the suit two days after Wayne County Clerk Cathy Garrett determined he didn’t have enough signatures to appear on the Aug. 5 Democratic primary ballot. She found Conyers was more than 400 signatures short of 1,000 needed.

The suit was filed against Garrett and Michigan Secretary of State Ruth Johnson by the American Civil Liberties Union’s Michigan chapter on behalf of two petition circulators and others. The signatures they gathered weren’t counted because they hadn’t complied with state voter registration requirements.

The ACLU also asked the court to order Garrett and Johnson to stop enforcing the law, which the group deems unconstitutional. A hearing is planned for Wednesday in U.S. District Court in Detroit.

Johnson’s office declined comment. Garrett said in a statement earlier this week that it was “a very unfortunate circumstance” but she was “bound by the current laws and statutes of the state of Michigan.”

Under state law, people who circulate nominating petitions to get candidates on primary election ballots must be registered voters. However, according to the ACLU’s lawsuit, Michigan lawmakers last month amended the law to eliminate voter registration requirement for those circulating ballot initiative and referendum petitions and qualifying petitions for several statewide offices.

The lawsuit and ACLU officials say the U.S. Supreme Court and the 6th U.S. Circuit Court of Appeals, which includes Michigan, have struck down such requirements because they violate rights of free speech and political association.

“Courts across the country have held that petitioning to place an individual on the ballot is core political speech,” said Michael Steinberg, legal director of the ACLU’s Michigan chapter.

Conyers has until Friday to appeal Garrett’s ruling to the Michigan Secretary of State, and his campaign chairman, state Sen. Bert Johnson, said he will do so. As for the lawsuit, Johnson said it “mimics, mirrors and has the same merit of any suit” that Conyers would file independently to fight a law Johnson calls “draconian.”

In an interview on a downtown Detroit sidewalk, Conyers said “of course” when asked if he believed he would get on the ballot.

But he quickly added, “it’s in court so I don’t want to start predicting. I take that statement back.” He declined further comment at the urging of an aide.

Conyers’ opponent in the primary is the Rev. Horace Sheffield III. His campaign manager, Richard Jones, filed the challenge after learning at least two people hired to get signatures for Conyers weren’t registered at the time to vote in Wayne County.