US Opens Diplomatic Mission for Somalia in Neighboring Kenya
Advertisement 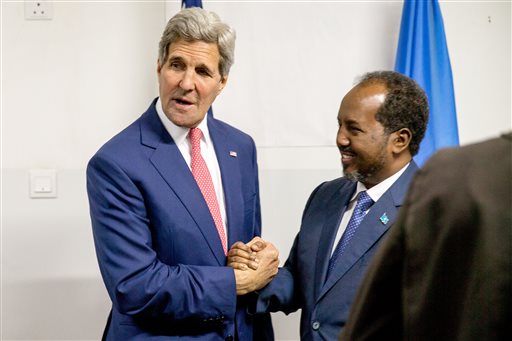 Secretary of State John Kerry meets with President Hassan Sheikh Mohammed, right, at the airport in Mogadishu, Somalia, Tuesday, May 5, 2015, in a show of solidarity with the Somalian government trying to defeat to al-Qaida-allied militants and end decades of war in the African country. (AP Photo/Andrew Harnik, Pool)

WASHINGTON (AP) — The U.S. has opened a mission for Somalia as part of its effort to normalize relations with the Eastern Africa nation, which continues to battle Islamic extremist rebels.

In a statement issued Tuesday, the State Department said the U.S. mission is based in the American Embassy in Nairobi, Kenya. It will be led by a chargé d’affaires until President Barack Obama appoints and the Senate confirms an ambassador.

The State Department said U.S. officials will continue to travel to Somalia to conduct official business as security conditions permit.

The U.S. recognized the Federal Government of Somalia in January 2013. Secretary of State John Kerry announced plans for re-establishing a diplomatic presence in Somalia when he visited its capital, Mogadishu, last May.

Kerry became the first U.S. secretary of state to visit Somalia when he spent three hours at an airport there amid tight security. In a symbolic visit showing support for its fledgling government, Kerry promised that the U.S. would help the nation recover from decades of conflict.

Somalia has a population estimated by U.S. officials at 10.6 million. In July, President Hassan Sheikh Mohamud ruled out the possibility of elections set for next year because of an Islamic insurgency that has terrorized Somalia for the last eight years.

Somalia’s Islamic extremist rebels al-Shabab, who have been driven from strongholds but still operate in some rural parts of the country, have stepped up attacks against coalition military forces, government officials and foreigners in recent months. Last week they overran an African Union military base southwest of the capital and claimed killing 50 of the soldiers stationed there.

Conflict has roiled Somalia since 1991, the year that warlords ousted dictator Siad Barre. In the wake of the formation of the Federal Government of Somalia, African Union forces from Uganda, Ethiopia, Kenya, Burundi and Djibouti backed the government against al-Shabab, which is allied to al-Qaida.

Skating is All the Rage in Kenya’s Capital