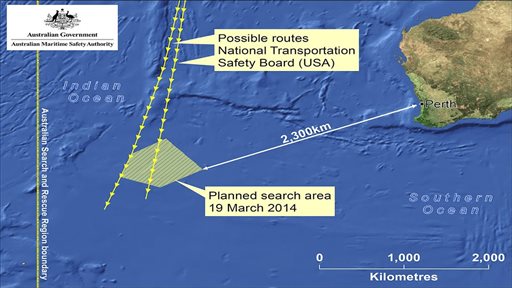 CANBERRA, Australia (AP) — The search area for a missing Malaysian airliner in the southern Indian Ocean has been refined based on the latest analysis, while the investigation into how the plane came to crash cannot proceed until the wreckage and black boxes are recovered, officials said Thursday.

Australia’s Deputy Prime Minister Warren Truss said analysis of a failed attempted satellite phone call from Malaysia Airlines to Flight 370, which disappeared March 8, “suggests to us that the aircraft might have turned south a little earlier than we had previously expected.”

The overall search area still remained unchanged, he said. He did not elaborate on how that analysis was achieved.

Truss and Malaysian Transport Minister Liow Tiong Lai signed a memorandum of understanding on Thursday on cooperation in the search for the missing Boeing 777 as it progresses to the expensive next phase. The agreement shares the ongoing costs between the two countries.

The airliner disappeared with 239 people aboard after flying far off course from Kuala Lumpur to Beijing.

Liow said investigators had advised that success of the undersea search for wreckage and the aircraft’s back boxes with cockpit voice recordings and flight data was crucial to solving the mystery of the disaster.

“The investigation cannot continue without the search result,” Liow said.

The search could take up to a year to scour 60,000 square kilometers (23,000 square miles) of the Indian Ocean seabed and cost 52 million Australian dollars ($48 million).

Chinese Vice-Minister of Transport He Jianzhong, who also attended the Canberra meeting, said the ministers had all agreed that the search will not be interrupted or given up. Most of the lost passengers, 153, were Chinese.

Ebola in Mind, US Colleges Screen Some Students

A Flavor Out of Favor: Dog Meat Fades in S. Korea