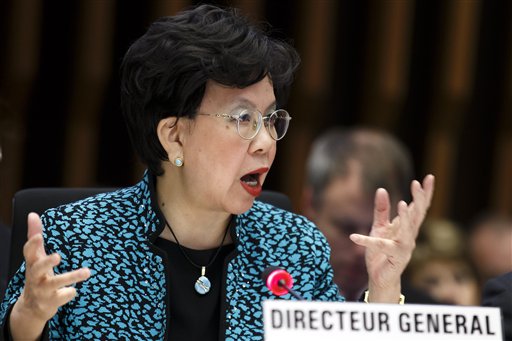 In this Sunday, Jan. 25, 2015 file photo, China’s Margaret Chan, Director General of the World Health Organization, WHO, addresses her statement during the special session on Ebola of the Executive Board, at the headquarters of the WHO in Geneva, Switzerland. An experimental vaccine tested on thousands of people in Guinea exposed to Ebola seems to work and might help shut down the ongoing epidemic in West Africa, according to interim results from a study published Friday, July 31, 2015. (Salvatore Di Nolfi/Keystone via AP, File)

LONDON (AP) — The United Nations Mission for Ebola Emergency Response is officially winding down Friday, handing its leadership role and senior staff to the Geneva-based World Health Organization as efforts to contain the deadly virus continue.

“We have reached an important milestone in the global Ebola response,” U.N. Secretary-General Ban Ki-moon said in a statement Friday, while noting that that crisis “is not yet over.”

The Ebola mission, also called UNMEER, was established last year as WHO struggled to get a handle on an outbreak that has killed more than 11,000 people, mainly in Guinea, Sierra Leone and Liberia. WHO had been strongly criticized for fumbling its response to the epidemic, and the creation of UNMEER was widely seen as a rebuke to its leadership.

Speaking to reporters Friday, UNMEER chief David Nabarro said he had seen signs that WHO had already absorbed some of the lessons of the Ebola disaster, recovering its coordination role in West Africa and deploying more 1,000 staffers to the field.

“This is an example of the new WHO at work,” he said.

Speaking alongside him was WHO boss Dr. Margaret Chan, who said her agency was working to reform itself — especially by establishing an emergency arm that would operate independently.

But Charles Clift, a public health expert at the London policy institute Chatham House, was unsure if adding another department to WHO would help.

And despite the health agency’s repeated vows to hold itself accountable, Clift was unconvinced. He noted that some of the WHO leaders in Africa blamed for the slow response to Ebola have since been moved to other countries.

“Getting sacked doesn’t really happen at the U.N.,” he said.

Chan acknowledged that WHO was slow and that she was “absolutely accountable” for everything the agency does.

Edith M. Lederer at the United Nations contributed to this report.