Ugandan Rebel Commander to be Tried by International Court
Advertisement 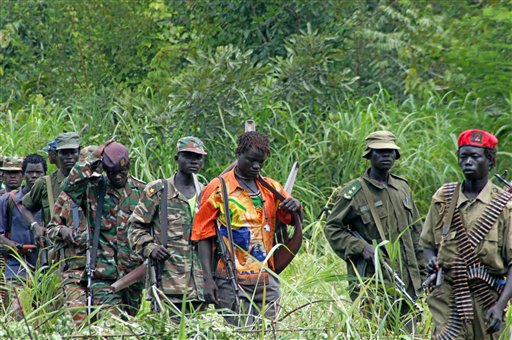 In this July 31, 2006 file photo, members of Uganda’s Lord’s Resistance Army (LRA) are seen as their leader Joseph Kony meets with a delegation of Ugandan officials and lawmakers and representatives from non-governmental organizations, in the Democratic Republic of Congo near the Sudanese border. (AP Photo, File)

“Finally it has been decided. Domnic (sic) Ongwen will be tried at the ICC in the Hague,” Ankunda tweeted. The United Nations, African Union, Uganda and United States consulted on the decision to try him at the International Criminal Court in The Hague, Netherlands.

In Washington, U.S. State Department spokeswoman Marie Harf confirmed that Ongwen would be delivered to the ICC. Harf said the U.S. would soon hand over Ongwen to a Ugandan continent of the African Union’s task force. He will then be transferred to The Hague.

Although Uganda wanted to try him itself, the U.S. has concerns about how Ongwen would be treated there and whether high standards of detention and prosecution would be upheld, other officials said on condition of anonymity because they weren’t authorized to speak publicly about the ongoing diplomacy.

Ugandan State Minister for Regional Cooperation, Asuman Kiyingi, had said on Monday that Uganda wanted to try him.

The LRA, led by Joseph Kony, began in Uganda in the 1980s as a tribal uprising.

Ongwen, Kony and three others who have reportedly since died were charged by the ICC. The court’s warrant of arrest for Ongwen lists seven counts of alleged individual criminal responsibility including crimes against humanity, enslavement, murder and inhumane acts of inflicting serious bodily injury.

Ongwen was initially turned over to the U.S. by people claiming to be members of the Muslim group Seleka, Pentagon spokesman Col. Steve Warren said. He referred questions about a reward to the State Department.

Harf wouldn’t say if the U.S. has paid or would pay in future reward claims by some members of the Seleka militia.

Kony became internationally well-known in 2012 when a U.S.-based advocacy group produced a widely viewed video. Despite an intensified hunt, Kony is believed to be constantly on the move across Central Africa.

Amid its Other Struggles, Puerto Rico Enjoys Drop in Crime