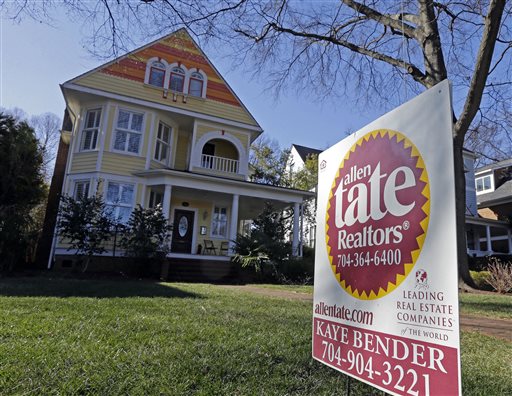 The National Association of Realtors said Monday that sales of existing homes tumbled 4.9 percent last month to a seasonally adjusted annual rate of 4.82 million. That brings sales down to their lowest level since April 2014.

Relatively low mortgage rates and steady job growth have yet to spur more activity from buyers and sellers, raising the possibility of either a spring sales rush or a second straight year of numbness in the real estate market. Few properties are being listed for sale, would-be buyers are holding off on purchases and snowstorms are cutting into traffic at open houses.

Weak sales in 2014 had set up expectations of a strong rebound in 2015, yet signs of that resurgence have yet to appear. The addition of roughly 1 million new jobs over the past three months has failed to make much of a dent in home-buying.

Homes did sell at a rate 3.2 percent faster than January 2014, but that increase largely reflects the brutal winter weather at the beginning of last year that depressed home-buying and caused the entire U.S. economy to briefly shrink. The noticeably more robust U.S. economy coming into 2015 was supposed to buoy sales, but the market has barely stirred so far.

“The weather hit is nothing like the scale of the damage seen last winter, but we would not now be surprised to see a further decline in activity in February,” said Ian Shepherdson, chief economist at Pantheon Macroeconomics. “The underlying trend in sales is more or less flat.”

Few properties are coming onto the market. Just 4.7 months of supply were listed for sale at the end of December, compared with an average of 5.2 months during 2014, according to the Realtors.

Nor have builders ramped up construction. Housing starts slid 2 percent in January, according to a report from the Commerce Department last week.

The limited supply of homes can lift prices to higher levels, which may then lead would-be buyers to wait until they have more choices. Weekly mortgage applications fell 13.2 percent, the Mortgage Bankers Association reported last Wednesday.

Affordability has become a problem as prices have climbed at a faster clip than incomes. The national median home price rose 6.2 percent over the past 12 months to $199,600. That has priced out many first-time buyers, who represented just 28 percent of sales compared to their historic share of 40 percent.

Mother Nature is also beginning to take its toll. Nasty snowstorms in the Midwest and Northeast likely kept would-be buyers away, further crimping sales heading into March and beginning of the spring buying season.

Buyer traffic for newly built homes slowed in February, according to the National Association of Home Builders/Wells Fargo sentiment index.

The Realtors said previously in a separate report that the number of signed contracts in December fell 3.7 percent, suggesting that sales will remain under pressure in the coming months.

Possibly hurting sales further, mortgage rates have crept upward for the past two weeks, ending what has previously been a yearlong slide.

Average 30-year fixed rates were 3.76 percent last week, according to the mortgage giant Freddie Mac. The average has risen from 3.59 percent at the start of February.

The current levels remain below the 4.33 percent average from a year ago, but the previous lows might keep current homeowners from upgrading since it would mean abandoning their current mortgage for a loan with possibly a higher rate and larger monthly payments.

Google Teams Up with 3 Wireless Carriers to Combat Apple Pay