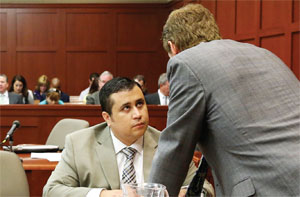 Special to the NNPA from the Florida Courier

SANFORD, Fla. – Driving up to the Seminole County Criminal Justice Center in Sanford, no one would know a case that garnered international attention was going on.

One lone Seminole County resident held a sign in the fenced-off protest zone on Tuesday as the trial of George Zimmerman was taking place inside the courthouse.

On Feb. 26, 2012, Zimmerman fatally shot 17-year-old Trayvon Martin in a gated community in Sanford. Zimmerman is claiming self-defense in the shooting.

Sanford City Manager Norton Bonaparte said in a June 26 interview with the Florida Courier “the fact that they (residents) are not at courthouse (protesting) doesn’t mean anything” about their emotions over the killing of Martin.

Bonaparte said that on the evening of June 24, more than 200 people attended a town hall meeting at Allen Chapel African Methodist Episcopal organized by the Seminole County NAACP Branch. They were praying instead of protesting.

Seminole County NAACP President Turner Clayton Jr. told a local TV reporter that the “so-called “demonstration area” that has been designated you will not see us protesting in that particular area cause no one tells us where to go, how long to stay, what to do, and what to say.”

Bonaparte, Sanford’s city manager for nearly two years, said he and the city’s new police chief, Cecil Smith, are prepared for whatever may happen during the trial and when the verdict is reached.

Smith attributes the calm from residents to the fact that their demands were met.

“Citizens made requests for several things to take place – George Zimmerman arrested, Police Chief (Bill Lee) fired and an investigation of the police department,” he said, noting that all has taken place.

Smith said he is not worried about an eruption taking place after the verdict similar to what happened after the Rodney King verdict in April 1992. Los Angeles residents rioted and burned down parts of Central Los Angeles when the police officers accused of beating King were found not guilty.

Bonaparte recalled when 30,000 people came to the city last year angry that no charges had been filed against Zimmerman. “There were no incidents then,” he noted.

George Zimmerman, left, chats with his attorney Mark O’Mara on the 12th day of his trial in Sanford on Tuesday.
(GARY W. GREEN/ORLANDO SENTINEL/MCT)

Smith has been on the job for three months. He replaced Lee because of how he handled the case and because of alleged bad relations between the Blacks and the police department of the city.

The new chief said he is working to figure out who people are and hearing their major concerns.

“There was division, discontent (with the police department),” Smith said he has concluded so far.

Smith also said he is concerned about what the media will report about Sanford’s police department and its residents.

“There has been a lot of things people thought took place that didn’t happen,” he continued, adding that he believes the entire police department has gotten a bad reputation because of what Lee allegedly condoned.

He was proud of testimony of police patrol Sergeant Anthony Raimondo, who was one of the first to arrive on the scene, giving Martin mouth-to-mouth resuscitation without a protective mask.

“He tried to extend the man’s life. A lot of people didn’t know that. The Sanford Police Department does care about people. That officer put his life at risk doing mouth-to-mouth resuscitation.”

In reference to the police department’s handling of Zimmerman the night of the shooting, Smith said the officers followed procedures.

“We do not charge; state attorney does,” he pointed out.

Smith hinted that an arrest should have been made the night of the shooting by saying, “(We have) the right to detain a person as long as we need. If the individual was detained, next we talk to state attorney office,” he stated.

The chief said his main concern is the arrival of out-of-town protesters as the verdict gets closer. He worries the media will report what is not the voice of Sanford residents.

As the trial continues, Sanford officials are working to deal with the black eye the city received after the shooting.

City Manager Bonaparte said the purpose of the plan is to “move the community forward.”

He admitted that parts of the plan have not been addressed such as the creation of a local human relations commission, hiring of a director of community relations, and the creation of a panel to take a critical look at the Sanford Police Department.

As a result of the group, pastors were given four seats in the courtroom for the duration of Zimmerman’s trial so they can tell parishioners what is going on.

Bonaparte said the pastors also have organized a “call for prayer’’ on July 8 and 15, starting at noon at area churches.

He said they also are working on programs to reach out to youth before they become part of penal system.

Bonaparte wanted to make it clear, that in spite of Zimmerman trial, life goes on in Sanford.

He noted they are being proactive working on lessening crimes in the city and doing what they can to prevent incidents such as what happened between Martin and Zimmerman.

Bonaparte said the case involving Martin and Zimmerman is not representative of the people who live in Sanford.

“This was a tragic encounter of two individuals in a city of 54,000,” he said, explaining that most people don’t know Zimmerman had only lived in the city three years and that Martin was visiting his father from Miami.

The lone protester at the courthouse on Tuesday was James Fraleigh, a 54-year-old White man from Casselberry holding up a sign reading “Stand your ground, Nelson Lied.”

Fraleigh was referring to Judge Debra S. Nelson, the judge in the Zimmerman murder case.

In December, she had rejected Fraleigh’s “stand your ground” claim in an unrelated case in which he was charged with whacking his neighbor in the head with a shovel.

Initially, Zimmerman had planned on using the “stand your ground” defense but chose to go with a self-defense claim.

“I’m here for justice for everybody. The law has to be applied fairly and just. The case should invoke everybody’s sensibility,” Fraleigh added about the Zimmerman trial.