The Rehabilitation of Joe Paterno, Back at No. 1
Advertisement 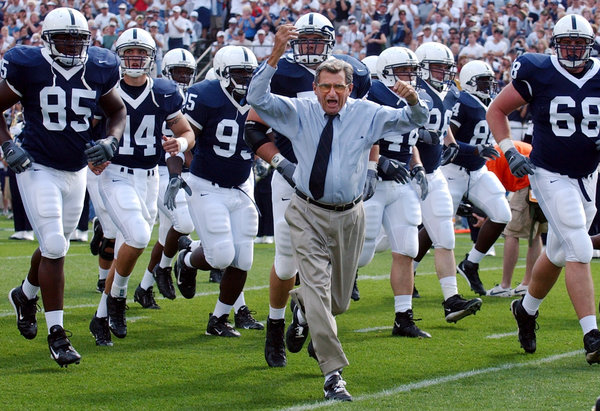 In the settlement, Penn State’s wins from 1998 to 2011 would be restored, again making Joe Paterno, who died in 2012, the winningest head coach in college football. (Carolyn Kaster/Associated Press)

(The Washington Post)—Amid the child-molesting scandal at Penn State, Joe Paterno lost his job, more than 100 victories as a coach and his reputation as a kind of football Renaissance man. Even a statue of him outside the university’s stadium was removed.

But nearly three years after Mr. Paterno’s death at age 85, his reputation is experiencing something of a revival.

On Friday, as part of a settlement in a lawsuit filed by Pennsylvania officials, the N.C.A.A. agreed to restore 111 victories that it had rescinded from Mr. Paterno after the scandal, in which a former longtime assistant coach, Jerry Sandusky, was found to have sexually molested boys. With his record of 409-136-3, built from 1966 until he was fired in disgrace near the end of the 2011 season, Mr. Paterno again becomes the major-college football coach with the most victories.