The Blood Pressure Study Had Positive Findings -- So Why Are Some Doctors Annoyed?
Advertisement 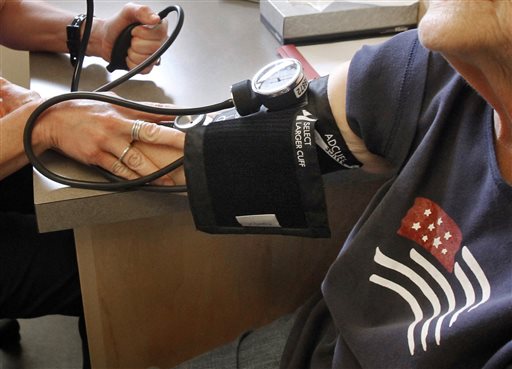 In this Thursday, June 6, 2013 file photo, a patient has her blood pressure checked by registered nurse in Plainfield, Vt. Your heart might be older than you are, according to a CDC report released Tuesday, Sept. 2, 2015 which takes a new approach to try to spur more Americans to take steps to prevent cardiovascular disease. (AP Photo/Toby Talbot)

(Forbes.com) – Last week, the NIH held a press conference announcing that a study on blood pressure recommendations had ended early. A systolic blood pressure of 120, according to the agency and the SPRINT study’s authors, was linked to an almost 25% lower risk of death when compared to current recommendations nearer 140. The risk of any adverse cardiovascular event was 30% lower. But despite the positive findings, the announcement provoked a bit of a backlash from doctors.

“Let’s release our study’s conclusions and nothing else.” Right. https://t.co/xKYdCPF8MC

Those numbers — 25% and 30% — were the only figures that the NIH released, despite giving the news a full-court press. Why didn’t we get more? Because the study was not ready to publish, and the NIH decided to make a lot of noise about it anyway. There is no doubt that the NIH needed to release a public statement. In large clinical trials, patients are protected by an independent committee, known as a data safety monitoring committee or DSMB, that has full access to the data. If there is a harmful side effect, the DSMB will stop the study because it is no longer ethical to give patients the drug. But if the treatment is so effective that there is no chance that the trial will fail, then it is no longer ethical to let anyone take placebo. That is what happened in SPRINT. And that meant that the NIH had to tell every patient and doctor involved in the study. “We realized that when we disseminated this information to approximately 10,000 people, 100 locations, many different academic locations, etc.,” says Lawrence Fine, branch chief of the Clinical Applications and Prevention office at the NIH. “We felt that a centralized, carefully constructed message that made clear the value of this information at this time was a better way to proceed than just to have it out without a clear message.” So the National Heart, Lung and Blood Institute, the division of the NIH that ran the study, had to make a statement. But when it did so, it broke with standard practice in making that release.