‘The best is yet to come,’ Mayor says during 2019 State of the City address
Advertisement 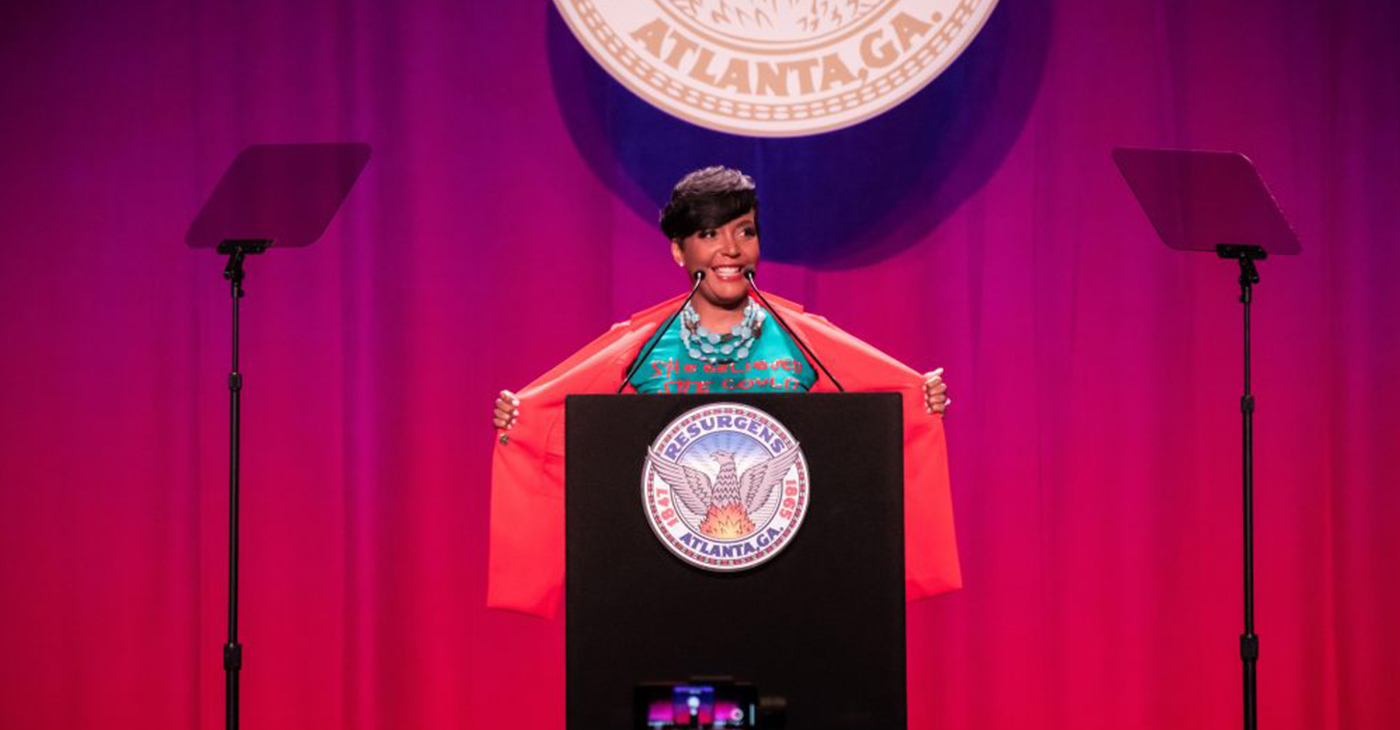 By Anare Holmes & Marshall A. Latimore

Only a mayor named Keisha could saunter into a packed house flanked by an entourage of all female Atlanta Police Officers as the sound of Beyonce’s female empowerment anthem, “Run the World (Girls),” blared throughout a Georgia World Congress Center ballroom Thursday.

Greeted by an enthusiastic crowd of civic, corporate and community activists, leaders and everyday Atlantans, Atlanta Mayor Keisha Lance Bottoms entered into the space of her second “State of the City” address with flare, excitement and receipts, totaling what has been a stellar year of accomplishments to affirm campaign promises and commitments she made in her first “State of the City” address last March.

“Today, after 14 long months in office, a Super Bowl championship and one knee surgery later, I’m proud to say Atlanta is an even stronger city and the best is yet to come,” Bottoms said. “As we continue to build on our vision of One Atlanta—to bring equity to every neighborhood to Atlanta, our mission is well underway.”

One of the most prominent highlights of the address included Bottoms’ announcement that she will establish Atlanta’s first dedicated Department of Transportation (DOT) to improve the safety and accessibility of city streets and bring new vision and leadership to meet the increasing demands of Atlanta’s growing population.

The move is a key pillar of Mayor Bottoms’ One Atlanta agenda, connecting neighborhoods with each other and with jobs, schools and services, and providing more equitable transportation choices for Atlantans, she said.

“I have publicly spoken about my grandmother, who rode MARTA to work every day for 30 years and the generational impact her ability to simply get to and from work has had on my family. Like my grandmother, there are many working families who rely on public transportation, but the importance of transportation extends beyond buses and trains,” Bottoms said. “Today, I am proud to announce the creation of Atlanta’s first dedicated Department of Transportation, a one-stop-shop, combining the work of multiple City departments, to better deliver for Atlanta’s mobility future.”

The management of Atlanta’s more than 1,500 miles of streets is currently dispersed across numerous city agencies. City officials will now look to create a one-stop transportation agency that combines the road construction and repair operations of the City’s Department of Public Works with the long-term planning capabilities of the Department of City Planning’s Office of Mobility.

These duties will be integrated with the infrastructure investment program of the Renew Atlanta Bond / TSPLOST, which manages capital roadway projects backed with dedicated, voter-approved funding streams.

The new agency will manage a range of transportation improvements from roadway repair and maintenance to sidewalk and bike lane construction to installing and upgrading streetlights and traffic signals, making streets more accessible to people of every age and ability.

In fact, Atlanta City Council authorized a study on the creation of a DOT in 2017, and the Mayor’s Office began a feasibility review and internal assessment last year.  The Council will now review the Mayor’s proposal and must enact legislation authorizing the standalone transportation department, the structural organization of which will be set up throughout the spring.

Mayor Bottoms has also authorized the drafting of a strategic transportation plan to establish the vision and set key goals and accountability measures for the new agency.

“A city’s success begins with its streets, and a dedicated department is critical to putting the transportation pieces together,” said Janette Sadik-Khan, transportation principal At Bloomberg Associates, a pro bono consultancy that will advise on the creation of the DOT. “Atlanta has an unprecedented opportunity to change course on transportation, and Mayor Bottoms is showing the strong leadership that a city needs not just to grow but to make real progress for Atlantans.”

The Mayor’s announcement starts a period of assessing and developing the organizational and reporting structure of the eventual transportation department, a process that will be overseen by Senior Transportation Advisor Jacob Tzegaegbe, whom Bottoms appointed in December.

Once the new DOT is created, the Mayor will appoint a leader, who will be in an effective position to represent the city’s interests for winning and directing federal, state, regional and local funding; developing more effective partnerships with state and regional transportation agencies like Georgia DOT, MARTA/ATL; and collaborating with local partners like Community Improvement Districts.

In addition to transportation, Bottoms touted the progress her administration has made in tackling criminal justice reforms that ended the city’s use of cash bail bonding and also shared plans to repurpose the city’s jail into a resource center that will provide opportunities for those who need it.

The Mayor also revisited her commitment to honor campaign pledges to address affordable housing, to advance HIV/AIDS research and to undergird the city’s infrastructure through the creation of two cabinet-level administration posts that include the hires of Chief Housing and Chief Health officers.

While gentrification continues to push out many longtime Atlanta families, Mayor Bottoms underscored her initiatives to keep local citizens in their homes through the Heritage Housing Program and other Invest Atlanta resources.

“She really understands the needs of the poor and underprivileged,” says State of the City Address attendee Carla Morrison, founder and executive director of Sisters of Today and Tomorrow, a mentoring program for black girls, teenagers and young adults aspiring to enter into professional careers. “She continues to make her haters her motivators, even when the social media trolls were criticizing her macaroni and cheese, she used that as an opportunity to start a public service campaign that raised $37,000 to feed 4,800 families in need.”

Beyond heralding the victories she’s won in just two years in office, Bottoms looked ahead to the future, reminding the capacity audience how critical it is for the city to prepare for the United States Census Count in 2020.

“We’ve identified nearly 80,000 previously excluded addresses. By counting these Atlantans, we will potentially add $100 million dollars in Federal funding for public services each year,” she said. “(We) set trends…and are leading the way as two other cities are replicating our office’s One Atlanta model.”

Mayor Keisha Lance Bottoms’ 2019 State of the City Address struck an optimistic tone with civic, corporate and community leaders. Details of her administration’s accomplishments grouped under key quality of life benchmarks in a city annual report are as follows:

A Safe and Welcoming City

Residents Who are Equipped For Success