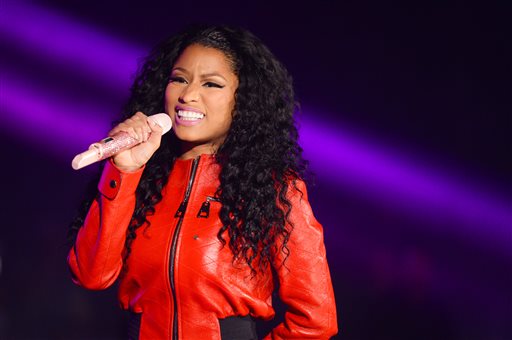 In this June 7, 2015 file photo, Nicki Minaj performs at the 2015 Hot 97 Summer Jam at MetLife Stadium, in East Rutherford, New Jersey. Taylor Swift and Minaj traded words on Twitter after the rapper said she was upset she didnt earn a nomination for video of the year at the MTV Video Music Awards. (Photo by Scott Roth/Invision/AP, File)

NEW YORK (AP) — Taylor Swift and Nicki Minaj traded words on Twitter after the rapper said she was upset she didn’t earn a nomination for video of the year at the MTV Video Music Awards.

Minaj tweeted multiple times that she didn’t understand why her rump-shaking video for “Anaconda” wasn’t up for the top award when MTV announced the nominees Tuesday.

She wrote in one tweet: “If your video celebrates women with very slim bodies, you will be nominated for vid of the year.” She also tweeted, “When the ‘other’ girls drop a video that breaks records and impacts culture they get that nomination.”

Minaj did not mention specific artists in her tweets.

Swift, who’s “Bad Blood” is nominated for video of the year, is the top VMA contender with nine nominations.

“I’ve done nothing but love & support you,” she tweeted to Minaj. “It’s unlike you to pit women against each other. Maybe one of the men took your slot.”

Minaj said she never mentioned Swift in her tweets.

“Huh? U must not be reading my tweets. Didn’t say a word about u,” Minaj said to Swift. “I love u just as much. But u should speak on this.”

“If I win, please come up with me!! You’re invited to any stage I’m ever on,” Swift replied.

“Anaconda,” released a year ago, has 488 million views on YouTube. It earned VMA nominations for best female video and hip-hop video. Minaj is also up for best collaboration for “Bang Bang” with Ariana Grande and Jessie J.

Miley Cyrus will host the 2015 VMAs, which will air live Aug. 30 from the Microsoft Theater in Los Angeles.

50 Cent Testifies About His Finances in Sex-Tape Lawsuit