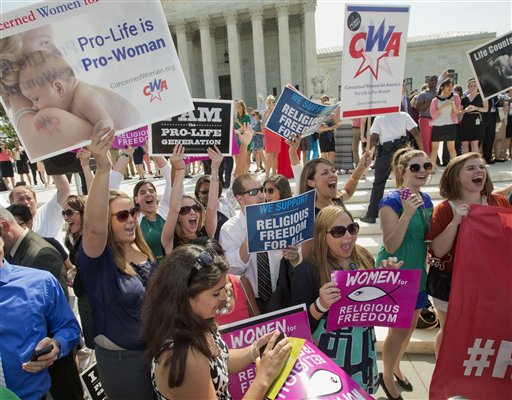 Demonstrator react to hearing the Supreme Court’s decision on the Hobby Lobby case outside the Supreme Court in Washington, Monday, June 30, 2014. The Supreme Court says corporations can hold religious objections that allow them to opt out of the new health law requirement that they cover contraceptives for women. (AP Photo/Pablo Martinez Monsivais)

Washington (CNN) — Some corporations have religious rights, a deeply divided Supreme Court decided Monday in ruling that certain for-profit companies cannot be required to pay for specific types of contraceptives for their employees.

The 5-4 decision on ideological lines ended the high court’s term with a legal and political setback for a controversial part of President Barack Obama’s healthcare reform law.

It also set off a frenzied partisan debate over religious and reproductive rights that will continue through the November congressional elections and beyond.

All five conservative justices appointed by Republican presidents ruled in favor of closely held for-profit businesses — those with at least 50% of stock held by five or fewer people, such as family-owned businesses — in which the owners have clear religious beliefs.

Rights Groups Call for Congress to Act on the Voting